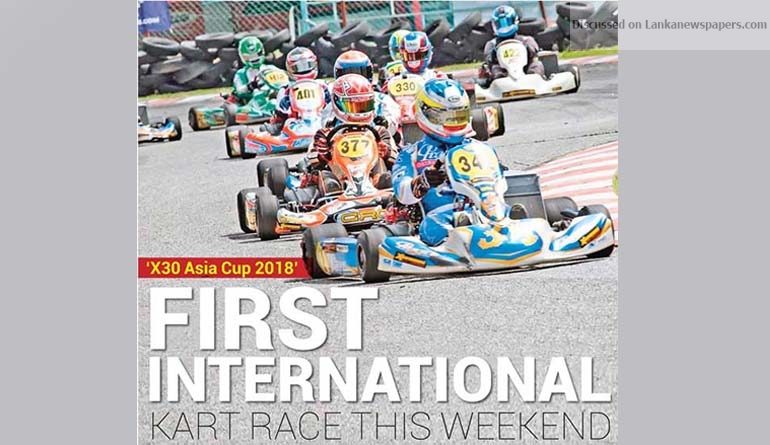 This enthralling start to Asia’s Karting season will feature a number of Asia’s best drivers and winners of RotaxMaX Asian Championship and X30 along with Sri Lanka’s prominent Kart racers. The X30 Asia Cup 2018 is going to be the precursor to the six round championship race series that is held throughout the year in Singapore and Malaysia.

Winners of the X30 Asia Cup 2018 will gain entry to the IAME International Final held in Le Mans, an invitation-only event and one of world’s largest and most prestigious professional karting races. Spectators can purchase tickets to witness the thrilling feats of 40 kart racers from across Asia including 9 Sri Lankans from tickets.lk. Initiated with the endorsement of the Ministry of Tourism Development and the Ministry of Sports, the event will open new avenues to revolutionize karting in Sri Lanka and in the region.

“This is going to be an exciting couple of days not only for Kart racers but also all motor sports enthusiasts across the island. This is the first time that a Karting event of this magnitude and importance will take place in Sri Lanka and in South Asia. We are doubly thrilled as some of the Sri Lankan racers are expected to pose a fierce challenge to Asia’s best racers. Moreover, this is an opportunity for Sri Lanka as a nation to open our doors to motor sports enthusiasts as a motor sports destination on par with our South East Asian counterparts,” commented Dinesh Jayasundera, MD/ CEO of David Pieris Racing & Leisure.

The event has already attracted over 50 mechanics, 100 officials and marshals and approximately 200 volunteers. In order to bring the SLKC to international standards to prepare for the event, David Pieris Racing & Leisure extended the track in Bandaragama from 800 m to 1,212 m (lengthier than the famous Malaysian track) with a significant investment. The Company received cordial assistance from Niroshan Pereira, President of Sri Lanka Motor Sports Club as International Race Director during the preparations while the specialized Karting commission of the FIA – the world governing body of motor racing recognized the tracks as suitable for X30, following completion of extension work.

In line with this, the Company has already scheduled the opening of a theme park along with a resort planned adjoining the SLKC which will commence development in April 2018. The theme park will cater to local leisure seekers as an alternative weekend getaway to Singapore, Malaysia, Thailand and Hong Kong.