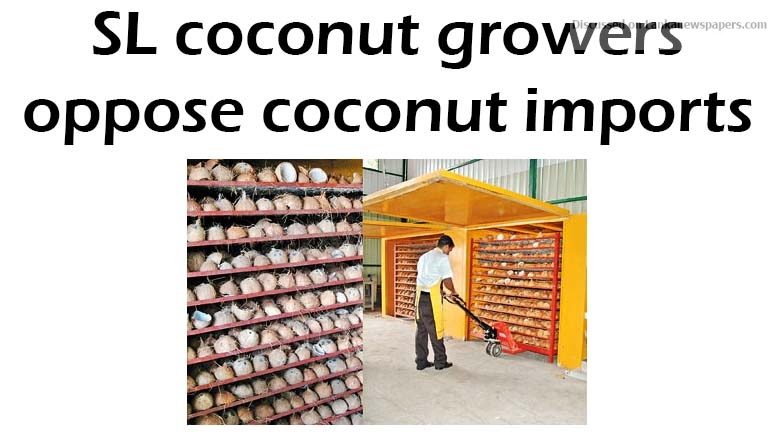 The Coconut Growers Association at an emergency meeting on Tuesday at Ramada Hotel, Seeduwa noted that mite disease which has been in Sri Lanka for the last 20 years has affected 30 per cent of the cultivation.
The CGA said that they are launching a strong lobbying campaign against the import of fresh coconut and urged the government not to destroy the good name that the Sri Lankan coconut has gained.Members said that that mite has come from Kerala through illicit means of smuggling and it first infested Kalpitiya.

Jayantha B. Samarakoon, President, Coconut Growers Association (CGA) told the meeting that that if fresh coconut or frozen kernel is imported it would bring in the same fate that is haunting the tea industry where low quality tea is mixed with Sri Lankan tea and re-exported which would affect the reputation that the country has earned of ‘Pure Ceylon Tea’.

“There is uniqueness in our coconut, especially in the desiccated coconut – unique in colour, texture and sweetness which the DC produced in other countries like Indonesia, Malaysia and the Philippines do not have,” he said adding that for this reason a tonne of DC exported from Sri Lanka fetches US$3,500 whereas the other countries fetch only around $2,900 per tonne.

Mr. Samarakoon said that the moment fresh nuts are imported and mixed with the coconut of this country, the reputation of unique Sri Lanka coconut would vanish. He said that due to these reasons nobody in the coconut industry opts for the import of neither fresh nuts nor frozen kernel.

As far as he knew, he said that the pressure for imports is coming from four large scale manufacturers of coconut milk and coconut cream.

He said that if fresh coconut is imported from a country like Indonesia where their cultivation has been affected by around 10 diseases, some deadly, these would come to Sri Lanka too.

Coconut production in the country has gone down due to the prolonged drought and the mite disease. With the announcement of imports, prices in the market place have also fallen to Rs. 75 from Rs. 100.

The drought and mite disease saw the coconut production drop from 3,000 million nuts to 2,300 million nuts. The government would be interested, it was discussed, to reduce the price of coconut because there is an election around the corner and in this country today everything is politicised.

In the meantime, they pointed out that the Coconut Research Institute still could not find a permanent and practical solution for the mite disease for the last 20 years and due to the disease not only has the number of nuts dropped but there is also average weight drop which has become a double blow.

Further, the wilting of the coconut palm top has taken a heavy toll and most rampant in the South (Weligama) where farmers have cut down more than 250,000 coconut trees and burnt them to prevent the disease from spreading to other trees.

The meeting observed that fortunately other than these two diseases Sri Lanka doesn’t have other coconut palm diseases compared to other countries. However if fresh coconut is imported the country would lose this fortune too.

It was noted that about six months ago, amidst the Association’s protest against imports the Government imported one container load of coconut but the coconut was not released and they may have probably dropped it into the sea.

The meeting also noted that large portions of coconut land are used for housing development which retards the development of the coconut industry. Also cost- wise, coconut cultivation in less than 50 acres is not feasible. Therefore they pointed out that at least the Government should release around 50,000 acres of land for coconut cultivation annually.