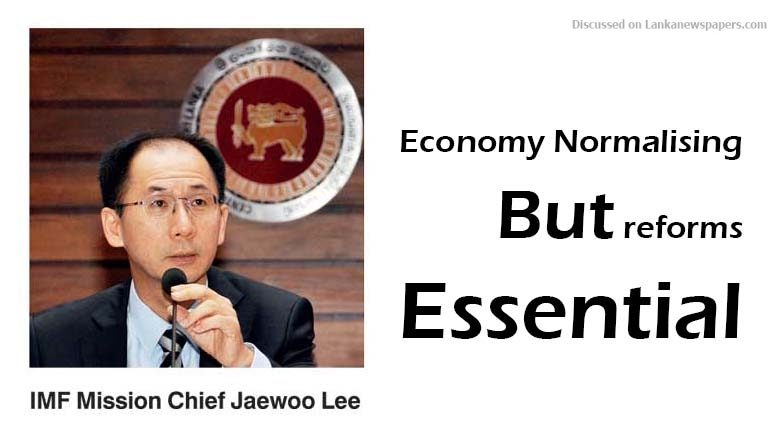 The International Monetary Fund (IMF) envisages Sri Lanka’s economy normalising in 2018 with the real GDP growth projected to reach about 4.6% over the medium term; however, the global lender called on the Government to continue its reform process centered on fiscal consolidation to maintain stabilisation momentum.

“The real GDP growth is projected to increase from 4.2% in 2017 to 4.6% in 2018, as agriculture recovers with the return of normal weather conditions while construction and services remain resilient, the IMF said in its staff report on Sri Lanka. This, however, is marginally below the Central Bank’s predictions of growth being between 5% and 5.5%, as detailed in the institution’s Roadmap.

Over the medium term, growth is projected to reach about 5%, consistent with IMF staff estimate of potential growth.

Sri Lanka is pursuing a 3-year reform program with IMF support under the extended arrangement under the Extended Fund Facility (EFF) since June 2016. Macro stabilisation and two major tax reforms were the key outcomes of the first half of the program.

The IMF said the performance has been broadly on track regarding fiscal consolidation, revenue mobilisation, monetary policy management, and reserves accumulation.

The Government legislated in 2016 a new Inland Revenue Act as well as VAT amendments which narrowed exemptions.

The program’s landmark reform, the new Inland Revenue Act, was legislated in October 2017 and will be implemented in April 2018. Consistent with the objectives of the EFF-supported program, the Government of Sri Lanka announced a new far-reaching economic plan titled Vision 2025 in September 2017.

“The staff report, however, predicts the downside risks to remain significant given the high level of public debt and need for further fiscal consolidation, fiscal risks include ineffective implementation of the IRA, further delays in SOE reforms, and failure to provide for weather calamities,” the IMF statement said.

Too slow a deceleration in credit growth could add to the financial sector vulnerability, and some upside risks to near-term inflation outlook remain, the report said.

According to the global lender, Sri Lanka’s external position remains weaker than implied by fundamentals and desirable policy settings. While the current account gap remains moderate and international reserves have increased, reserve coverage remains low by most adequacy metrics, it said.

Risks to public debt sustainability remain elevated as the public debt, comprising central government debt, guaranteed debt, and Fund credit outstanding, is expected to rise slightly to 87 percent of GDP in 2017 due to the still large fiscal deficit and the weaker exchange rate.

The report says the weak financial performance of major SOEs in 2017 highlights the need for timely reforms. Three SOEs closely monitored under the program – Ceylon Electricity Board (CEB), Ceylon Petroleum Corporation (CPC), and SriLankan Airlines – recorded a combined loss of Rs 52 billion(0.4 percent of GDP) in first half of 2017 as opposed to a combined profit of 0.2 percent of GDP in 2016.

“Rising oil prices and weather shocks raised the cost of non-commercial obligations (NCOs) to supply electricity and fuel at prices below cost-recovery levels. The efforts to restructure the airline have hit an impasse, as the search for a strategic partner restarted under the new task force overseen by the Prime Minister’s Office. Future program reviews will discuss the action plan for the airline and set key milestones as a structural benchmark.”

The IMF review said the monetary policy should maintain a tightening bias until clearer signs emerge that inflation and credit growth have stabilised, supported by macro prudential measures as needed.

The staff review said the IMF fund program will remain fully financed for the next 12 months, although risks remain significant. Firm financing assurances from the World Bank, the Asian Development Bank, and key bilateral donors, are in place, and prospects are favourable for adequate multilateral and bilateral financing for the remainder of the program, it said.