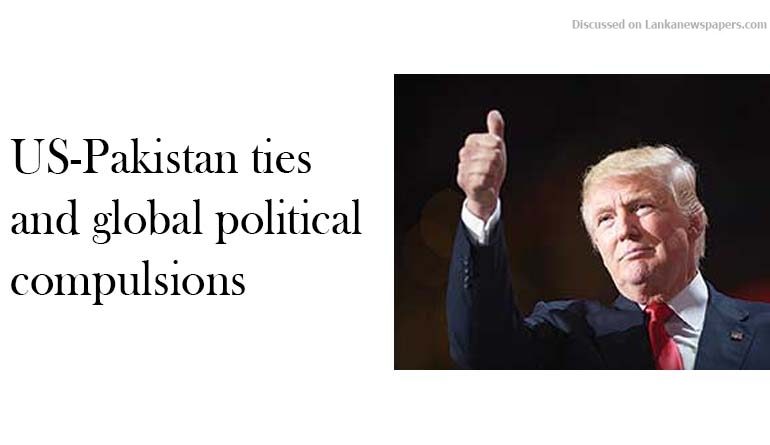 If the Trump administration carries out its current threat in full to use the ‘aid and assistance weapon’ against Pakistan over terror-linked issues, it would amount to changing US policy on Pakistan beyond recognition. This is on account of Pakistan being a political and military ally of the US over the decades since 1947.

A peep at post-independence South Asian international political history would enable the observer to understand the factors and compulsions that went into the making of US policy towards Pakistan over the years. To begin with, it was quite ironic that Pakistan should have emerged an ally of the US and not India; after all, for much of its post-independence history, Pakistan was under military rule and India occupied the position of a veritable icon of democracy in the Asian region. But Republican US Presidents in particular, in the immediate post-independence decades, chose to view India with suspicion over its foreign policy principle of Non-alignment.

For some of these Presidents serving in the tumultuous Cold War decades, absolute allegiance to the US by countries the world over was seen as a ‘must’, if the US was to conduct sustained cordial relations with them. Democratic governance was not the sole criterion for friendship; staunch loyalty to the US was the main requirement.

Accordingly, India’s policy of Non-alignment was viewed by conservative, Right wing US Presidents more as a stance of opposition to the US and the West and not as a foreign policy strategy that grew out of the pressures of international Cold War politics.

Consequently, although Pakistan was for the most part of its post-independence history ruled by the military, it came to be viewed by the US as a reliable ally and not India, despite the latter’s obvious democratic credentials. Based on these realities of the Cold War, US-Pakistan ties proved enduring over the years. US military and financial assistance was siphoned regularly to military governments in Pakistan and such assistance proved a lifeline to Pakistan while US ties with India were full of ups and downs.

These cosy ties that the US forged with Pakistan proved particularly important after the Soviet invasion of Afghanistan in 1979. The event marked the onset of a super power proxy war in Afghanistan with the US siphoning arms to the anti-Soviet Afghan Mujahedin through Pakistan. These US-Pakistan military links thrived throughout the decade of the eighties until the Soviets departed from Afghanistan in 1989, having suffered setbacks in the Mujahedin uprising. The US had taken ‘sweet revenge’ from the Soviets for its humiliating defeat in Vietnam.

The prime question in this context now is – Could the US afford to dispense with Pakistan as an ally in South Asia? US President Trump is on record as having threatened to cut off aid and assistance to Pakistan based on the allegation that the latter is not doing enough to rein-in terror groups that are believed to be operating out of Pakistan and thereby frustrating Western efforts at wiping out anti-state militant violence in Afghanistan, but would this prove a feasible policy proposition?

To be sure, Pakistan may not be seen in Washington as valuable a strategic partner now as in Cold War times. The rationale for a Cold War type alliance no longer exists but there are other international complexities that need to be noted by the US that cannot be dismissed out of hand.

There is a widespread perception that Pakistan is drawing close to China on a number of fronts and the US would be naïve to gloss over this development. Particularly, since India’s relations with the US are growing increasingly positive, the compulsion on the part of Pakistan to improve its ties with China could be expected to be great. Compounding these issues, is the current dialogue on curbing terror among China, Pakistan and Afghanistan. By disengaging with Pakistan, the US would be paving the path for the South and South West Asian international power balances to tilt more in favour of China and its allies. From the US point of view this is a negative turn of events.

However, one vital difference between the current Chinese and US political leaders is that the former have a relatively sound grasp of the forces that at present propel international relations. The Chinese political leadership realizes that it is economic forces that primarily shape international politics. Whereas, the Trump administration is being increasingly motivated by Realpolitik considerations, the Chinese leadership comparatively leans on economic instruments to serve its interests on the international scene. Its ‘Belt and Road’ initiative is one such project aimed at shaping the international order more in its favour.

Whereas, the world is no where close to resolving the mind-boggling problem of ‘terror’ than it was, perhaps, decades ago, the world is being rendered an increasingly dangerous place to live in by political leaders of foremost states who believe that coercive force is the answer to ‘terror’ and linked issues. Whether it be the US, China, Russia or any other big power, international peace would be served by them if they realize that national and military power alone does not hold the key to a more stable world order.

Hopefully, the Trump administration would come to realize that ‘America First’ at any cost would lead to greater instability in our part of the world. Such a policy is bound to open the floodgates to more militancy since ‘terror’ groups would come to realize that there is no countervailing international force against them. If ‘terror’ is to be curbed every state in South Asia counts and should be engaged by the bigger powers. From this point of view, the US would be blundering by taking a tough stance on Pakistan.