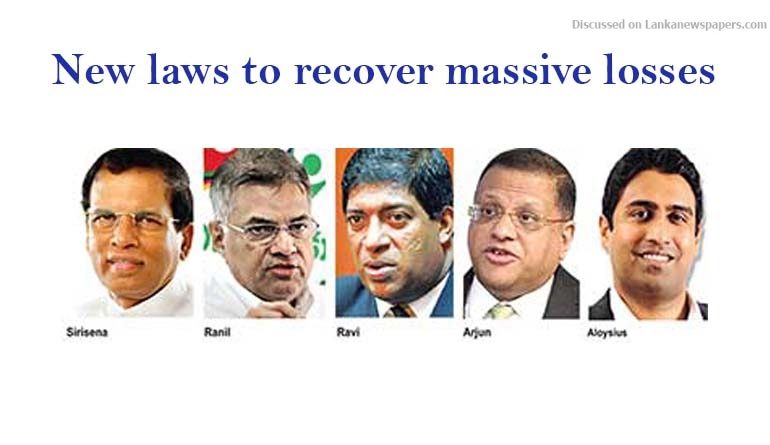 President Maithripala Sirisena yesterday endorsed a key recommendation, by the Presidential Commission of Inquiry which probed bond scams, that losses caused by Perpetual Treasuries Pvt. Ltd. (PTL) be recovered. “The recovery could be done by following the normal legal procedure, but, since it would take a longer time, the commission has suggested to present a special bill to Parliament to bring about laws for the speedy recovery of the loss,” the President said, making a special statement, last evening.

The President said he had already referred a copy of the final report of the the Presidential Commission of Inquiry (PCoI) to the Attorney General for further action.

The PCoI report has said Central Bank officials were rendered inactive before former Central Bank Governor Mahendran. It has revealed that Mahendran interfered in bond auctions and is responsible for leaking information and wrongful decisions.

Prime Minister had done nothing irregular in appointing Mahendran to the post of Governor Central Bank, the Commission has said in its report, noting that PM’s statements to Parliament indicated that he had reposed his trust in Mahendran and Samarasiri. The report said that the Prime Minister should not have done so.

The report reveals that there has been misappropriation of funds in the Employees Provident Fund and recommends a Forensic Audit Examination to ascertain the exact amount of loss.

The report has identified Perpetual Treasuries, Arjun Alloysius, Kasun Palisena as those responsible and recommended civils and criminal action against all those responsnble for losses caused to the EPF.

The President said that the PCoI had pointed out that there was a need to amend certain provisions of the Commission to Investigate Allegations of Bribery or Corruption Act and action had lready been taken to obtain the services of the officials of the Legal Draftsman’s Department to draft the new bill.

“Strengthening the CIABOC should have been a long time back and we have already initiated the much delayed process.

“The Governor of the Central Bank has informed that he had already suspended services of some Central Bank employees and disciplinary action had been initiated against them.

“I call upon the Attorney General and the Ministry of Justice to present three urgent bills to Parliament seeking its approval as per the recommendations of the PCoI to prevent similar frauds and irregularities in the Central Bank.

“I would like to record here that I have instructed my Secretary to hold monthly meeting to review the progress in filing cases against those responsible for the loss and to implement the recommendations of the PCoI.

“I would specially mention here that I would not hesitate to recover the loss amounting to more than Rs 11,545 million and to take legal action against those who are responsible for the loss.

The losses caused at the Employees Trust Fund, Mahapola Scholarship Trust Fund, National Savings Bank’s Fund and Sri Lanka Insurance Corporation amounted to Rs 8,529 million or Rs 8.5 billion, according tot the Commission report. The PTL earned a profit of Rs. 11,545 million and the balance had come from the private sector.

“It has also been recorded that the Perpetual Treasuries company earned the aforementioned profit during a period of short times such as five months.

President Sirisena assured that the action would be taken in respect of the report on treasury bond scams in accordance with the Attorney General’s instructions and to present it to parliament and, thereby. make it available to the public.

The President said that he had received final report of the Presidential Commission of Inquiry to Investigate and Inquire into Serious Acts of Fraud, Corruption and Abuse of Power, State Resources and Privileges (PRECIFAC). “This commission has served about two and a half years and I take this opportunity to thank judges, the Secretary and other staff of PRECIFAC and also appreciate the support extended by other institutions to PRECIFAC.”

“PRECIFAC has made several major recommendations and it’ll be the responsibility of the government to implement them.”

PRECIFAC has pointed out that the need to provide required training to personnel to enable them to handle investigations into corruption and irregularities due to severe dearth of such officers.

The PRECIFAC has stressed the need to appoint qualified persons to head state sector enterprises while pointing out the appointment of unsuitable persons to key positions.

President said that the PRECIFAC had informed him that it had earned much more funds to the state than the government spent thereon. The PRECIFAC has proposed the setting up of provincial courts system to hear bribery cases as those summoned to give evidence face hardships due to cases only being heard in Colombo High Court.

President said that they could be happy about the way the commissions carried out their mandates.

Assuring that no political party would be targeted, the President expressed satisfaction that the judiciary and commissions had been impartial and independent.