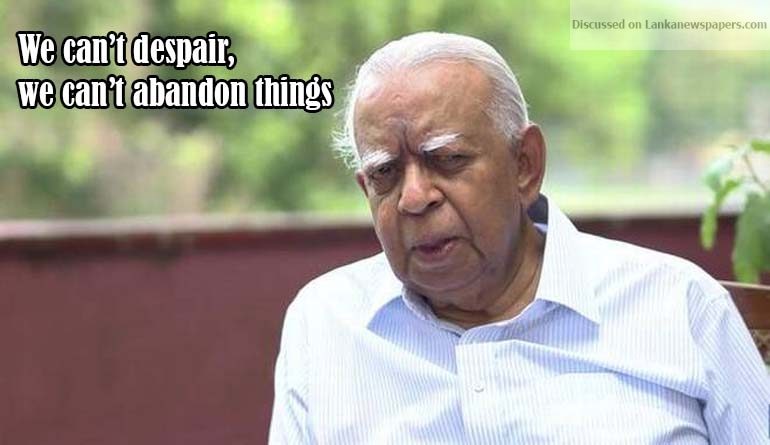 R. Sampanthan, leader of the Opposition in Sri Lanka’s Parliament, is also the country’s seniormost politician, having been in politics for more than six decades. In the January 2015 presidential poll, the Tamil National Alliance (TNA) he leads backed the President Maithripala Sirisena–Prime Minister Ranil Wickremesinghe combine that ousted former President Mahinda Rajapaksa. Three years on, in a conversation at his Colombo residence, the Tamil leader, now 84, weighs in on the government’s performance, particularly on promises made to the Tamils in the aftermath of a brutal civil war. He also reflects on the future of Tamil politics. Excerpts:

It is three years since Sri Lanka’s national unity government came to power with the overwhelming support of ethnic and religious minorities, including the Tamils. How do you reflect on that moment and your decision to support President Sirisena?

I have not the slightest doubt that we made the correct decision in backing Mr. Sirisena. We were sick of the Rajapaksa government which had been particularly unjust and unfair to the Tamil civilians.

President Sirisena had been involved with Tamil politics even before he stood for election. He was one of the strongest supporters of a just and reasonable solution to the Tamil question. He supported the constitutional proposals put forward by President Chandrika Bandaranaike, between 1994 and 2000. That, no doubt, influenced our decision. We were also influenced in our decision by the fact that Mr. Sirisena and Prime Minister Wickremesinghe were willing to work together. For the first time, this provided an opportunity for the emergence of a multi-party consensus, particularly between the two main political parties, on the Tamil question.

I have no regrets about the decision we made, though the Tamil people, and consequently those of us who represent them, expected greater performance from the government.

Assessing this government’s record, especially in relation to a political solution to the Tamil question and constitutional reform, what are the substantial gains made by the Tamils?

The Constitution process commenced in 2016 to evolve a reasonable political solution to the national question and considerable work has been done.

The steering committee [appointed with 21 members under the chairmanship of the PM] met regularly for discussions and submitted an interim report, which has been debated in Parliament. After the local authority elections [in February], we expect the Constitution process to move forward more rapidly. The process has been somewhat delayed because of certain positions taken by certain political parties.

The issues that have been of concern to the Tamil civilian population are the release of [civilians’] land held by the armed forces, the question of continued detention of political detenues and missing persons. I will not say that nothing has been done. I would certainly say that much more could have been done.

Some of the lands [previously held by the military] have been released both in the north and east, after we exerted much pressure on the government. Release of land is a continuing phenomenon. It is not easy, but it is happening. Even a few days ago, 133 acres was released at Keppapilavu in Mullaitivu. I worked very assiduously on that.

In regard to persons detained, about 40-50% of them have come out of jail. On the question of missing persons — apparently there have been about 20,000 complaints — it is a very large number. What their families fundamentally require is some information on their missing relatives. Some conclusion about whether that person is alive or not. There must be some solace, reparation, and some forms of assistance that will enable them to come to terms with reality and be able to pick up their lives and proceed.

The government has not yet addressed its commitments on the question of accountability adopted by the UN Human Rights Council, and co-sponsored by the Government of Sri Lanka in 2015. The Tamil civilian population is bitterly disappointed about the delay.

The constitutional reform process that the TNA is supporting, even prioritising it over war crimes accountability mechanisms, has slowed down with the many deadlines set by the government having lapsed. The debate is mostly stuck on abolishing the executive presidency, according Buddhism the foremost place and initiating electoral reforms, and little on devolution itself. Do you feel that the coalition government is letting down the Tamil people?

We are not able to come to any conclusion on what would eventually happen. But if there has been no serious debate on a certain matter, it can also be for the reason that there is not much disagreement on it. I will not go into the nuances of the issue now, for it is well known that the Chief Ministers of all the provinces of this country, particularly those from outside the north and east, have been very strongly supportive of extensive sharing of power between the centre and the provinces. But of course, I will hold my breath until we see the final formulations.

I am not pessimistic. This country needs a political solution to embark on a journey towards genuine development and progress, based on the equality of all its people. In these circumstances, what we can do is to remain steadfast in the pursuit of these processes, towards an early and successful conclusion. We can’t despair, we can’t abandon things.

Those of us entrusted with the responsibility have a duty to continue to repose at least a measure of trust in the process. We have to play a role that is responsible, pragmatic and oriented towards achievement of what is important for the Tamil people, rather than make a noise about everything and be a source of disruption and disturbance.

What is the alternative? Do the people want the return of the Mahinda Rajapaksa government? I am not saying that is a good enough reason for nothing to happen, but one must realise that under this government, the rule of law is maintained, we don’t have the culture of impunity that prevailed earlier, and the independence of the judiciary and civilian institutions has been restored.

When you take an overall picture of the situation, this is an environment conducive to the resolution of the issues pertaining to the Tamil people.

As Leader of the official Opposition, in what ways do you think you have been able to represent the concerns of Sri Lankans of other ethnicities and in other regions?

I have not ignored that aspect completely, but it may be that there is an expectation from some people that I could play a more constructive role. I will not disagree with that view, but at the same time, I think the most critical issue facing the country is the national question. If this country has not been able to get to where it should, it has been largely on account of this failure. I think the role that I am playing in that effort is probably not appreciated sufficiently by persons who think differently.

The country’s ethnic conflict was provoked and intensified by competing nationalisms — though arguably unequal — of the Sinhalese and Tamils. Even today, the dominant discourse of Tamil politics continues to be nationalist and ethnically polarising. How do you see Tamil nationalist politics, often evoking the LTTE and its relevance to the post-war context? Can it speak to the apparent religious intolerance and caste discrimination within Tamil society?

There are no doubts that there are certain fissures within Tamil society. These exist, I suppose, in every society.

The Tamil people need to come out of this sense of them being second class citizens in this country and not equal citizens. They don’t have the same rights that the others in the majority community have. The war was fought for that reason. The fact that the war has ended does not mean that the conflict itself has been resolved.

While I do think that there must be a greater appreciation of the need for balance and a cautious approach to different issues, there is a basic root cause that also needs to be addressed. If the new Constitution is able to provide the Tamil people with some belief in their future, these issues can probably be better addressed at that point of time than now.

The historic Northern Provincial Council (NPC) elections of 2013 gave the TNA its first opportunity in regional government. Despite the known limitations of inadequate power devolution, in what ways has the NPC served the people of the north? There is an accusation that much of the funds allocated remainS under-utilised, with the provincial administration not passing necessary statutes.

From all reports that I received and which I read perhaps the NPC could have done better. The 13th Amendment has its shortcomings, but more could have been done within its framework. Initially, the governor was being difficult, he was a military person, but since 2015 there have been new governors who are quite liberal and progressive. The NPC should have addressed issues pertaining to the people, their daily needs, in a much more constructive way than they have done.

Tensions within the TNA keep surfacing frequently, with some constituents accusing your party, the ITAK (Illankai Tamil Arasu Kachchi), of dominating the alliance. Could you comment on how the imminent local elections may impact Tamil politics and national politics?

At present, I see people raising national issues at the electorate. I would think that a majority of the people would be supportive of the politics of the TNA, as of now comprising the ITAK, the PLOTE (People’s Liberation Organization of Tamil Eelam) and the TELO (Tamil Eelam Liberation Organization). Only the EPRLF (Eelam People’s Revolutionary Liberation Front) has gone out. I am reasonably confident that the people in their wisdom will appreciate the policies being pursued by the TNA.

We don’t know what is going to happen. There are three main players in the south, SLFP (Sri Lanka Freedom Party), the party of the President, the UNF (United National Front) of the Prime Minister and the SLPP (Sri Lanka People’s Front) led by former President Mahinda Rajapaksa. I don’t think one is able to yet discern the trends. We have to wait to see how it turns out.

Have you thought of succession plans for the TNA leadership?

I have not been really planning anything or having any definite focus on anyone or any particular course of action. I think it must play out over a period of time, as early as possible. Let us see what happens as we go along. I cannot be there forever, we need to have someone take over. It is not easy — you have to be cautious, you have to be patient and you need not be answering everybody, that is not possible.