While parking on the streets in Colombo, one is often greeted with a familiar knock on the window as a parking warden in a brightly coloured jacket materializes from nowhere to remind you to pay your parking fee. Whereas some motorists are obliging, words are often exchanged between those less cooperative and the wardens, over the fees. Wardens are also often pulled up for issues such as, overcharging, not issuing tickets and bad behaviour.

But, according to the plans of the Colombo Municipal Council (CMC) motorists, in the future, would have to use metered parking machines to pay the fees, with parking wardens becoming an obsolete feature. While payments could be made by several methods through these machines those avoiding payment will find themselves in hot water as new by-laws of the CMC will allow them to collect additional surcharge amounts from offending drivers.

As the pilot project of the metered parking machines is well underway the CMC now hopes that people would understand why it is necessary for them to pay up.

The Colombo city today, has around 7,000 parking slots where fees are often collected manually by either parking wardens appointed by the CMC or by private companies who have been put in charge of the slots.

According to the Deputy Director of the CMC Traffic Division, Champa Ganepola the CMC currently manages collecting of charges and maintains the parking slots in the city.

“Earlier, only the CMC used to collect parking charges, but later, we had to outsource the task to private firms,” she said, adding that the issue was because the CMC did not have enough parking wardens. “We have only around 45 wardens, so manually collecting charges was difficult,” Ganepola said. Often drug addicts and various other individuals would collect parking fees after the wardens ended their shift. With the CMC unable to deploy staff for more than one shift, individuals would make use of it for their own gains.

According to the Traffic Engineer of the CMC Traffic Division, Manjula Kularatne, by outsourcing the task, these issues were mitigated with parking wardens now having to wear designated jackets and issue tickets to motorists.

However, manual collection by the CMC or outsourced persons too has its own difficulties.

With complaints and various issues being common the CMC has had to find an alternative.

“There have been various difficulties with manual collection,” says Kularatne. Officials are often bombarded with public complaints.

According to him the types of complaints vary. “Some complain they are being overcharged, while others say they were not issued a valid ticket” he pointed out. Undisciplinary behaviour on the part of the warden is yet another popular complaint. With the rising number of complaints the CMC was even forced to establish a phone number to which people could make all parking related complaints. “People can call on 2698529 and lodge their complaints,” Kularatne said. According to him the CMC then investigates and takes necessary action.

Other issues are, motorists who try to use the facility without payment. “Many people are still averse to paying for the service and try to get away without paying,” he said. Many issues crop up as a result. “We find it difficult to detect such persons through the current method,” Kularatne said.

It is due to these difficulties that the CMC has decided to opt for metered parking with a pilot project being launched on Galle Road and R.A de Mel Mawatha recently. Carried out on a public private partnership, Colombo now has around 100 metered parking machines.

With around a capital allocation of Rs 400 million for the project, the CMC says the project has been implemented under the revenue sharing model.

With the CMC unable to install the parking meters, the private investor will pay in 40 per cent of the revenue to the CMC for 8 years. Thereafter, the CMC is set to gain ownership of the machines, Kularatne confirmed. 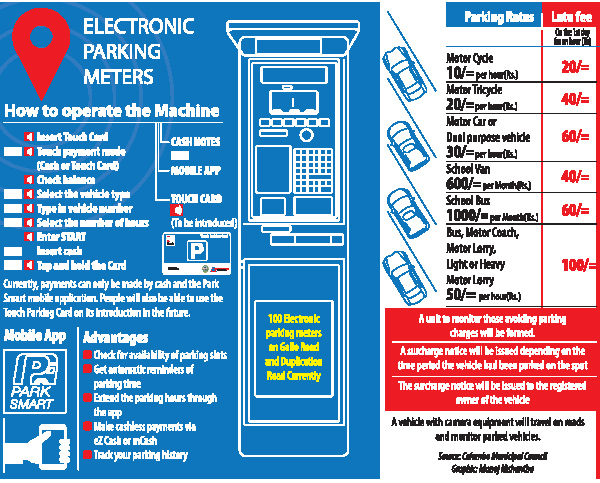 “These are in use successfully at the moment,” Kularatne pointed out. Currently motorists are able to pay the parking charges at these machines by cash or through a mobile application called ‘Smart Park’ which is available online, in the Google Play Store, free of charge. Users can reload on the app through various payment platforms such as, Mobitel M cash and Dialog Ez cash.

In the future, the CMC also plans to introduce a card for the purpose called, ‘Touch Park Card’ where people will be able to reload and use them at the metered parking machines.

“It will be more convenient as they will not need to carry loose change to pay the parking fee,” Ganepola pointed out. As the system has now been prepared it will be ready to be implemented once the card receives Central Bank approval. “We believe we would get the necessary approvals soon,” Kularatne said.

However, it is also common to see wardens in areas with metered parking machines.

According to the CMC this is necessary as many people attempt to not pay the relevant parking charges. According to Kularatne a system has been developed for non-paying users to be identified and will be implemented in the near future.

“We have developed a system where the number plates of parked vehicles will be scanned to detect those who have not paid the relevant fees,” he said. According to him a vehicle with the necessary equipment to scan the number plates will be deployed, and thereafter a surcharge notice will be issued to the registered owner of the vehicle.

In a recently released gazette No. 2029/29 in July this year the new amended parking by-laws were published making it necessary for the public to pay due parking charges for the entire period of parking, if they failed to do so. As per the new by-laws, parking without making the due payments or parking in excess of the time permitted will be considered as unauthorized parking and would be subjected to a late fee.

According to Kularatne the move is expected to reduce unauthorized parking and reduce the traffic, with Ganepola pointing out that revenue for the CMC is not the only cause for this new venture. “Unauthorized parking has reduced but we want to further reduce these numbers,” Kularatne said. He said in the future parking charges will also be revised when improvements are made in the public transport system.

Meanwhile, the CMC expects its revenue to rise when the project is in full force. Currently, while the parking charge revenue remains at Rs. 120 Million annually, of which the machines only collect around Rs. 18 Million. “We expect this would change and the total revenue would increase,” Ganepola said, as those attempting to avoid payment will be further penalized through the new system.

The CMC stresses that people must pay their parking fees. According to Kularatne is it important that people pay; if not it will be unfair on the general public. “It is a public space and therefore it is necessary for them to pay the relevant charge,” he said. Violators will not be able to get away under the new system in the future. 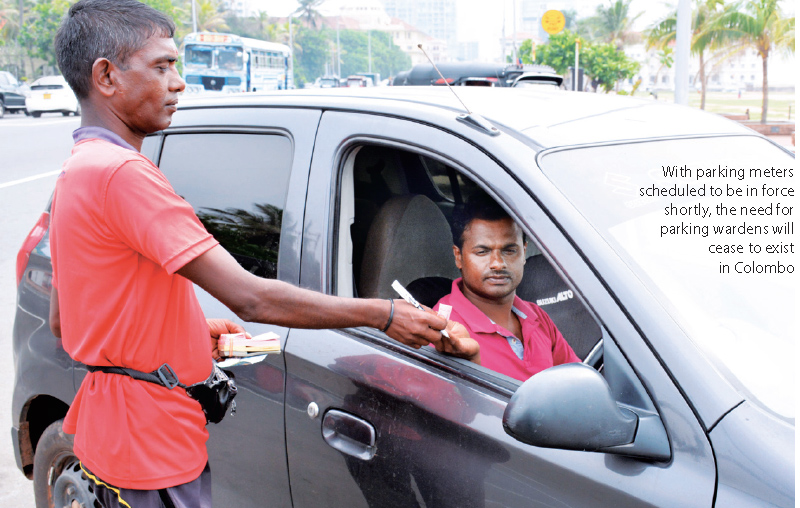