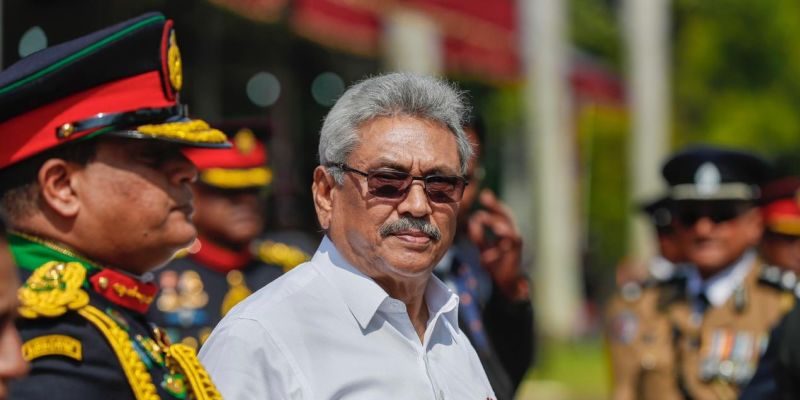 Former Sri Lankan president Gotabaya Rajapaksa arrived in Bangkok on Thursday (Aug 11) for what Thai authorities said would be a temporary stay, after weeks of seeking shelter in Singapore following his ouster since mid-July.

He is believed to have arrived in Bangkok’s Don Mueang Airport around 8pm Bangkok time, via charter plane from Singapore’s Seletar Airport earlier in the evening.

Mr Rajapaksa’s arrival in Bangkok comes as his visa in Singapore expires on the same day.

The 73-year-old former president fled his island nation last month amid months-long protests over Sri Lanka’s worst economic crisis in decades, which has left many Sri Lankans in dire shortage of fuel, food and medicine.

He arrived in Singapore on July 14 and was granted a 14-day short-term visit pass. This was later extended until Aug 11, The Straits Times earlier reported.

His arrival in Bangkok marks the second South-east Asian stop that Mr Rajapaksa has made to seek refuge from the political turmoil in his homeland and the massive protests largely targeted at him.

Thailand received a request from the current Sri Lankan government to allow the former president entry into the kingdom, said Mr Tanee Sangrat, director-general of Thailand’s Department of Information and foreign ministry spokesman on Wednesday.

The consideration was based on long-standing and cordial ties between Thailand and Sri Lanka, he added.

As a holder of a Sri Lankan diplomatic passport, Mr Rajapaksa can enter Thailand without a visa for 90 days, according to the 2013 Agreement on Visa Exemption between the two countries.

“The stay is temporary in nature with the aim of onward travel. No political asylum has been sought,” Mr Tanee said.

The two countries have no extradition treaty.

On Wednesday, Thailand’s Prime Minister Prayut Chan-o-cha said Mr Rajapaksa’s stay was for “humanitarian reasons” and that the former president had promised not to conduct political activities during his stay while seeking political asylum in a third country.

“This is a humanitarian issue. We have made a promise that it’s a temporary stay. No (political) activities are allowed, and this will help him find a country to take refuge in,” Mr Prayut was quoted as saying in The Bangkok Post.

On July 14, Mr Rajapaksa fled to Singapore via the Maldives, and then tendered his resignation soon after landing in Changi Airport.

Singapore authorities had said that the former president was allowed entry to the country on a private visit, and had not asked for, nor was he granted asylum.

His successor, Mr Ranil Wickremesinghe, was sworn in as acting president of Sri Lanka on July 15, with the support of lawmakers from Mr Rajapaksa’s party.

Mr Wickremesinghe has since promised to pass laws to limit the powers of the president – which is one of the protesters’ key demands.

He has also declared a state of emergency that has resulted in the crackdown of protesters and key organisers in the country.