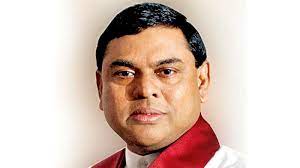 As the opposition alleged that Finance Minister Basil Rajapaksa has not made any statement in Parliament since December 10 last year on the status of Sri Lanka’s economy, Speaker Mahinda Yapa Abeywardene said he has no right to force any Minister to make a statement in the House while there is provisions for taking disciplinary action against an MP if he/she fails to attend sessions for three months.

Speaker came out with this remark when Chief Opposition Whip Lakshman Kiriella alleged that it has been three months since Minister Rajapaksa came to Parliament and made a statement on national Economy.

“Leader of the House Dinesh Gunawardene said there is no truth in what the Chief Opposition Whip is saying as the State Minister had answered all questions raised by the opposition on behalf of the Finance Minister. “ Mr. Kiriella is repeating the same argument almost every day,” he said,

Chief Government Whip Johnston Fernando said all statements which Basil Rajapaksa makes even outside Parliament have been debated in the House.

SJB MP Nalin Bandara said one cannot see why Mr. Rajapaksa cannot come to Parliament and answer questions when even the Ukrainian President addresses that country’s Parliament despite the war situation.

One thought on “LNP – Basil’s absence causes furore in Parliament”