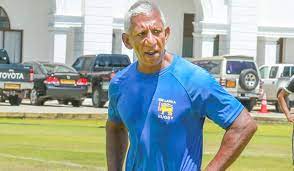 Chandrishan was born in 1961 and schooled at St. Peter’s College Bambalapitya upto Grade 5 before leaving for London to continue his studies at the Millhill School London.

After leaving school, he read for a degree in Criminology and completing it with great success. In the UK, he played cricket and rugby for Harlequins along with Simon Hunter.
He later played for the Roslynn Park team.

Chandrishan returned to Sri Lanka in 1979 and joined CH & FC. From 1979 he represented CH & FC in sevens and XVs rugby and was instrumental in getting Hunter to represent CH in the Premadasa Knockout tournaments since 1984 when Chandrishan captained the team.

He captained the national 7s team in 1994, touring Fiji and winning the 7s Championship in Fiji.

After leaving CH in 1994 he represented Kandy SC in the all island sevens tournament played at Havelock park.

Chandrishan was also a rugby selector and trainer for the Sri Lanka national cricket team.

One thought on “LNP – Rugby legend Chandrishan Perera passes away”