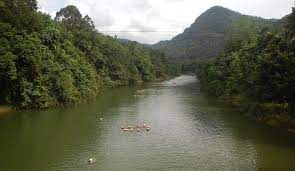 The government is ready to spend billions of rupees for the conservation of the Kelani River in the next few years, Environment Minister Mahinda Amaraweera said.

He expressed his views while participating in the Zoom discussion held with the participation of all District Secretaries across the island to implement the ‘Surakimu Ganga’ programme.

“The Kelani River is the most polluted of the 103 rivers in our country. The river is also used by the majority of the people of the Gampaha and Colombo districts for drinking and other purposes,” he said.

Therefore, the government has considered the cleaning of the Kelani River as a priority, the minister said.

“About 1,400 places where the Kelani River is polluted have been identified so far. The most important of these is the area from the Seethawaka River to Peliyagoda. The Ministry has decided to designate a Special Conservation Zone from Seethawaka to Peliyagoda and commence conservation activities,” Minister Amaraweera said.

It is also planned to inspect 40 special places where the Kelani River is polluted every month and take legal action against those who contaminate the river.

Measures have also been taken to prevent polythene and plastic getting into the river along with seven tributaries of the river.

Meanwhile, a total of Rs. 19 million has been allocated this year for the construction of permanent toilets for the people who domicile outside the conservation zone near the Kelani River and for those who do not have access to toilet facilities, the Minister said.

The Minister also instructed to expedite the marking of the Kelani River reserve. Also, the Measuring Water Quantity Project which tests water quality in the Kelani River should be started immediately and the Central Environmental Authority (CEA) will provide the relevant reports.

Financial allocations have been made to further implement two major projects in Seethawaka, Wakoya and Gampaha Pahuru Oya this year, he said.

The Minister told the Gampaha and Colombo District Secretaries that after the demarcation of the Kelani River Reserve, the occupants of the reserve will be evacuated and a housing scheme will be set up for them.

Minister Amaraweera also instructed the District Secretaries to submit more projects for the conservation of the Kelani River as the Surakimu Ganga program will be implemented in the next few years as well.

One thought on “LNP – Govt. ready to spend billions of rupees to clean Kelani River: Amaraweera”