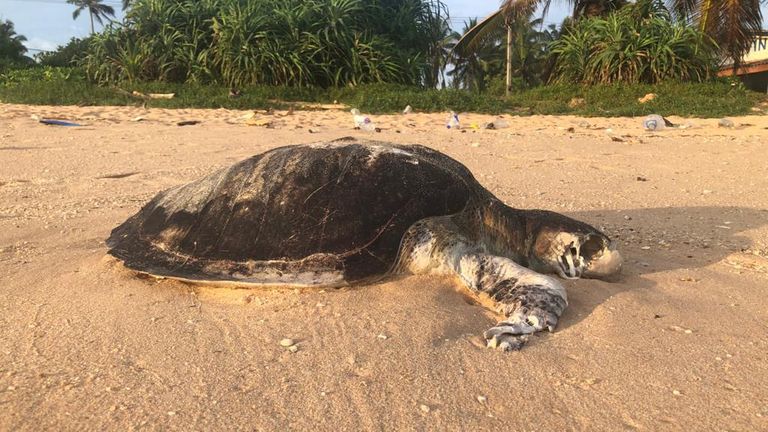 An expert committee appointed by the Marine Environment Protection Authority has revealed the death of sea turtles and other fish reported in recent weeks was due to environmental damage caused by the burning of the X-Press Pearl vessel, the Attorney General informed Court today.

Deputy Solicitor General Madhawa Tennakoon made these remarks when the magisterial inquiry into the fire ravaged container ship was taken up before Colombo Additional Magistrate Lochana Abeywickrama.

Tennakoon submitted to court that a large number of sea creatures including 176 sea turtles, 20 dolphins and four whales have been died so far as a result of the fire broke out aboard the vessel.

The Deputy Solicitor General said the remarks made by some individuals to the effect that the death of marine species most likely would have been due to the high tide season, were unacceptable.

The Deputy Solicitor General further stated that investigations are being carried out in 26 Magistrate’s courts islandwide into the death of sea creatures and parts of the carcasses have been referred to the Government Analyst Department in order to obtain analytical reports.

He further stated that investigations are being carried out into the deaths of sea creatures through a number of institutions including NARA and the Institute of Industrial Technology. Meanwhile, the Deputy Solicitor General further stated that an investigation is underway into the radio recording machine in the office of the Harbor Master at the Port of Colombo in connection with the fire.

President’s Counsel Sarath Jayamanne appearing for Sea Consortium Lanka (Pvt) Ltd, the Local Agent of X-Press Pearl vessel stated that the radio recording machine in the Harbor Master’s office contained all the telephone messages given by the captain of the ship that caught fire.

Jayamanne said that although he had requested the CID to check the messages contained in the machine from the beginning, the CID had not paid any attention to it. He said it was surprising to be told that the data on the machine had now been erased.

Meanwhile, the report submitted by the CID to the court has revealed that there was a technical fault in the radio recording machine. Further magisterial inquiry into the matter fixed for July 13.