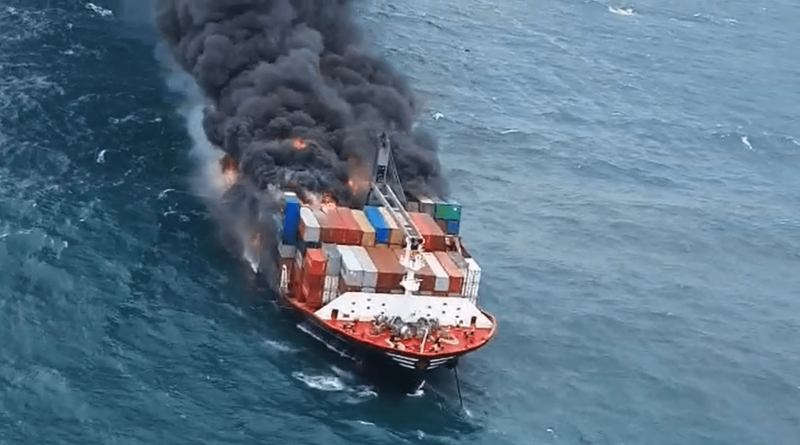 Indian and Sri Lankan authorities’ joint efforts to extinguish the massive fire onboard a container vessel off Colombo have yielded positive results with increasing signs of fire being under control, said Indian Defence Ministry on Sunday.

Smoke density has also reduced and the fire has been localised to a small area near the aft section of MV X-Press Pearl, the ministry said.

The distressed vessel MV X-Press Pearl was carrying 1,486 containers with nitric acid and other hazardous IMDG code chemicals. The extreme fire, damage to containers and prevailing inclement weather has caused the vessel to tilt to starboard resulting in the falling of containers overboard.

On Wednesday, the ICG rushed its vessels to douse the fire that broke out on container vessel MV X-Press Pearl off Colombo coast in Sri Lanka.

The challenging round-the-clock fire-fighting operation is underway since May 25, 2021, jointly with Sri Lankan authorities.

It has been named Operation Sagar Aaraksha 2 which symbolises growing maritime cooperation between India and Sri Lanka.

“At present, three ICG ships and four tugs deployed by Sri Lanka are involved in the operation and continue fighting the fire by spraying AFFF and sea water using external fire-fighting systems,” the statement read.

“The non-stop joint firefighting efforts have yielded positive results with increasing signs of fire being under control. Smoke density has also reduced. The fire has been localised to a small area near the aft section of the vessel,” it added.

The ICG ships ‘Vaibhav’ and ‘Vajra’, in addition to their fire-fighting capabilities, are also equipped with adequate Pollution Response (PR) capabilities for the oil spill.

The presence of a specialised PR vessel ICGS Samudra Prahari since May 29, 2021, has provided added strength to overall PR capabilities, the defence ministry said.

Additionally, ICG Dornier aircraft sorties are being undertaken daily from Madurai for aerial assessment of the situation. Reports from the ships and aircraft indicate that there has been no oil spill.

Also, the dropping of DCP bags over the burning vessel is being undertaken by a SriLankan helicopter to contain and extinguish the metallic fire.

ICG formations at Kochi, Chennai and Tuticorin remain on standby for immediateassistance, if any, towards Pollution Response. Indian Coast Guard is closely monitoring the situation and maintaining continuous liaison with Sri Lankan Navy, Coast Guard, Marine Environment Protection Authority (MEPA) and other authorities.

A similar joint operation between the two countries was named Sagar Aaraksha in September 2020 when ICG Ships and Sri Lankan authorities were involved in a firefighting operation onboard MT New Diamondoff the East Coast of Sri Lanka.

MT New Diamond was carrying 2,70,000 Metric Tonnes of crude oil at the time of the incident and a major oil spill was averted due to the joint effort by ICG and Sri Lankan authorities.