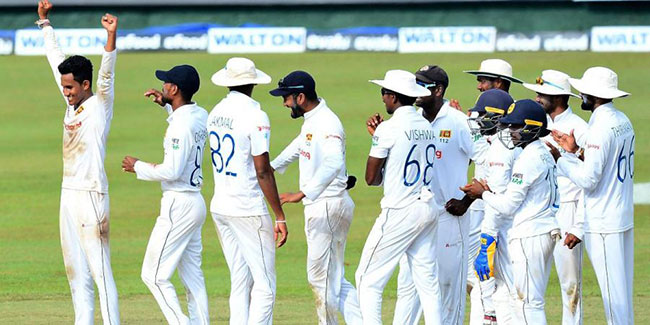 Ramesh Mendis and Praveen Jayawickrama made light work of Bangladesh’s middle and lower-order as Sri Lanka won the second Test by 209 runs on the fifth morning here at the Pallekele International Cricket Stadium on Monday.

With this win, Sri Lanka won the two-match Test series 1-0. Jayawickrama returned with five wickets while Mendis scalped four wickets for the hosts in the second innings.

Resuming on the fifth day at 177/5, Bangladesh was given an early jolt in just the third over of the day as Praveen Jayawickrama had Liton Das (17) adjudged leg-before wicket. Mehidy Hasan and Taijul Islam then got together at the crease to form a 23-run stand for the seventh wicket.

However, Sri Lanka broke the partnership in the 62nd over as Dhananjaya de Silva sent Taijul (2) back to the pavilion, reducing Bangladesh to 206/7. Mehidy and Taskin Ahmed tried their best to keep the Sri Lanka bowlers at bay, but to no avail.

Ramesh Mendis then got into the act as he dismissed Taskin (7) and Sri Lanka needed just two more wickets to register a win. Jayawickrama then had Mehidy (39) caught by Pathum Nissanka in the 71st over, reducing Bangladesh to 227/9. With this scalp, Jayawickrama registered his 10th wicket in the match.

Praveen Jayawickrama was named the Man of the Match for his dream debut, picking up 11 wickets in his maiden outing and becoming the first Sri Lankan to do so.

He followed his 6-fer with another 5-wicket haul to become the first Sri Lankan and the 4th player in the world to get 10 or more wickets on Test debut.