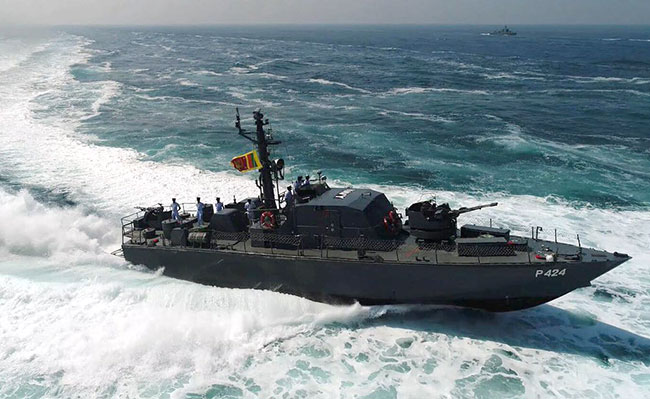 Sri Lanka Navy says it has deployed more naval units to patrol the northern and northwesters waters of the island around the clock, following the possibility of illegal migrants entering the shores of Sri Lanka via sea routes, which could surge the transmission of COVID-19 pandemic in the country.

Accordingly, steps have been taken to deploy more ships (OPV & FGBs) and Fast Attack Craft to raise surveillance in the International Maritime Boundary Line (IMBL) as well as Inshore Patrol Craft to patrol the coastal waters of the island, SLN said in a statement.

Moreover, the Navy has increased foot patrols to add weight on the security in the coastal areas and has established Coastal Observation Points in selected locations as well.

Similarly, the Navy has urged the fishing community in respective areas to be vigilant regarding the possible arrival of illegal immigrants and inform relevant authorities, if any suspicious activity is observed in this regard. They have also been informed not to make contacts with foreigners engaging in smuggling activities at sea.

“At this crucial juncture, the Navy urges all fishing communities to refrain from having any contact with foreign fishing vessels at sea and to provide information to the Navy if they know of any such smugglers,” the release said.

Meanwhile, the Navy has apprehended 04 Indian dhows, loaded with smuggled dried turmeric, cardamom, Kendu leaves and other consumer goods, together with 21 Indian nationals during operations carried out in Northwestern waters in the past two weeks.

The Indian nationals and the dhows held in these operations were repatriated back to Indian waters, taking in to consideration the prevailing spike in the transmission of COVID 19. The navy also emphasized that the increase in naval patrols led to the capture of foreign smugglers and their vessels in a short period of time.