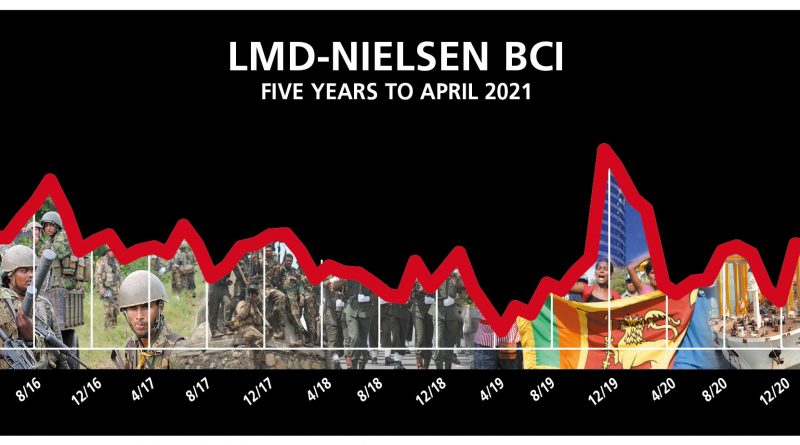 As the country looks to accelerate its recovery, striking a balance between supporting the economy through the pandemic and ensuring fiscal sustainability will be crucial, and the World Bank points out that a reform programme could serve as a fiscal anchor to help reduce debt vulnerabilities and curtail its sovereign risk.

Meanwhile, the latest LMD-Nielsen Business Confidence Index (BCI) survey – which was carried out in the first week of April – suggests that the outlook is more positive as sentiment improved ahead of the festive season.

THE INDEX The BCI witnessed an increase for the second consecutive month, surging 12 basis points to 138 in April from the previous month, registering the highest point for the index over the last 12 months.

Notably, this also places it 21 basis points above its average for the period (110) and 11 notches higher than the all-time median (127).

Nielsen’s Director – Consumer Insights Therica Miyanadeniya explains: “The New Year euphoria seems to have taken hold of both businesses as well as the general public. Sentiment was high [at the time of the survey] ahead of the Avurudu celebrations – after a year when a nationwide curfew was in force in April last year.”

SENSITIVITIES The impact of the coronavirus continues to be cited as the most pressing issue in business circles. Inflation, and bribery and corruption, are also viewed as major concerns.

Meanwhile, the spread of COVID-19 is seen as the main issue for the nation at this juncture, followed by the economy, and bribery and corruption.

PROJECTIONS While sentiment improved ahead of the festivities in April, Miyanadeniya states that the BCI and Consumer Confidence Index (CCI) are likely to plummet if this is followed by a third wave of the coronavirus.

“If not, as businesses have begun to pick up momentum, both indices are likely to continue to rise, provided that the economy and political climate in the country are perceived to be stable,” she adds.

In the April edition, we asserted that a downward trend in COVID-19 cases and deaths, and Sri Lanka’s ability to secure more doses of the vaccine, will impact sentiment.

While the roll out of the second dose of the vaccine has commenced – and new consignments are reportedly due soon – the rise in cases following the festive period along with new restrictions imposed by the authorities could undermine sentiment in the near term.

What could add to the misery is the prospect of political gamesmanship leading to instability, which of course isn’t new to Sri Lanka!