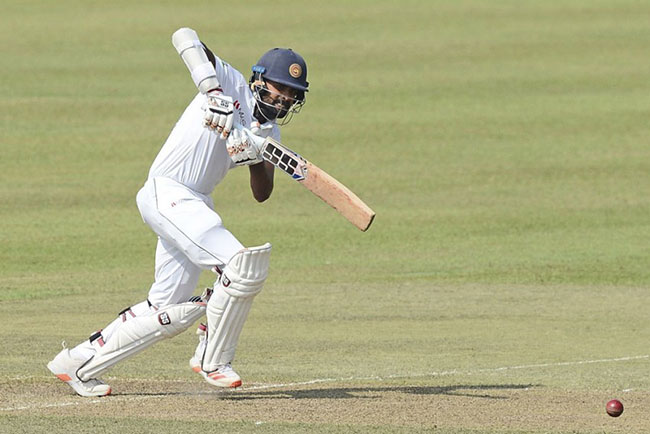 Sri Lanka have set Bangladesh a target of 437 in the fourth innings, with five and a half sessions remaining in the second Test. The declaration came when Taijul Islam completed his five-wicket haul by clean bowling Suranga Lakmal 15 minutes after the lunch break.

The home side lost three wickets during this short period. Taskin Ahmed had Niroshan Dickwella caught at the deep square leg boundary while Ramesh Mendis also went out swinging, caught at point off Taijul. This was only his second five-wicket haul on foreign soil.

Dimuth Karunaratne provided the thrust in Sri Lanka’s 194 for 9, hitting seven fours and a six in his 66 off 78 balls. It took him to 428 runs in the series, becoming the second batter after Kumar Sangakkara to score 400-plus runs in a Test series against Bangladesh.

He added 73 runs for the fourth wicket with Dhananjaya de Silva, who made 41 in a similarly aggressive manner. They were particularly severe on Mehidy Hasan Miraz, who was removed from the attack after bowling six expensive overs. His replacement, the part-time offspinner Saif Hassan had Karunaratne caught at short leg, his first Test wicket.

Sri Lanka didn’t enforce the follow-on on Bangladesh despite a 242-run advantage on the third evening. They lost Lahiru Thirimanne and Oshada Fernando in the seven overs at the end of the day, after Bangladesh were bowled out for 251.

The visitors have never batted for more than 60 overs in the fourth innings in Sri Lanka, although in the last instances they did beat the home side by four wickets in Colombo, in 2017.