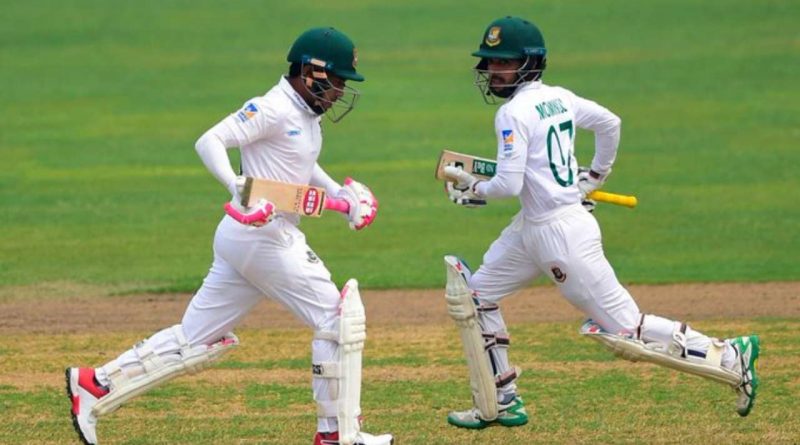 Tamim Iqbal’s counter-attacking half-century rid Bangladesh of early jitters in their second innings and ensured that their first Test against Sri Lanka ended in a draw at the Pallekele International Cricket Stadium in Kandy on Sunday.

Tamim remained unbeaten on 74 while skipper Mominul Haque was not out on the other end for a stern 23 as Bangladesh reached 100-2 in their second innings.

Torrential rains that started during the Tea break didn’t allow any overs to be bowled in the final session and Bangladesh ended the proceedings trailing Sri Lanka by seven runs in the second innings.

Earlier, Sri Lanka declared their first innings on 648-8 during the Lunch interval with Bangladesh bowlers, led by Taskin Ahmed finally ending their wickets drought of the fourth day and snapping up five in the morning session.

Taskin, who played his first Test in over three years, finished with 3-112, while Taijul took two wickets.

Resuming the day’s play on 512-3, trailing Bangladesh by 29 runs, Sri Lanka were hoping to score some quick runs in the morning session and test the Bangladesh batters later in the day.

This attacking mindset ended up being the downfall of both overnight batsmen, as Dhananjaya was the first batsman to go, as he dragged a ball into his stumps, which ended the mammoth 345-run stand between him and Karunaratne, the biggest for any wicket in Tests between Bangladesh and Sri Lanka.

Karunaratne also followed him to the dressing room in Taskin’s very next over, when he tried to pull the ball over midwicket only to hit it straight to Nazmul Hossain Shanto.

Pathum Nissanka (12) and Niroshan Dickwella (31) were the next to go, with the former edging a ball from Ebadot Hossain straight to wicketkeeper Liton Das while the latter was the victim of a misunderstanding with his partner and got run out.

Wanindu Hasaranga and Suranga Lakmal then made 43 and 22 not out respectively to push the lead over 100 and the Sri Lankan camp decided that was enough to challenge the visiting batsmen and declared their innings during the Lunch break.

Bangladesh batsman only needed to bat sensibly for one session in a barren fifth day pitch to take the sting out of the contest, but Saif Hassan, who got out for a duck in the first innings, and Nazmul, who struck his maiden Test century in the previous innings, fell to pacer Suranga Lakmal for one and 0 respectively to leave the hosts stuttering on 27-2.

But Tamim came to Bangladesh’s rescue with a counter-attacking innings, akin to his first innings exploits, where he charged the Sri Lankan bowlers and hit fours and sixes off of them to lift the pressure of the rest of the batsmen.

Tamim reached his 50 off just 56 balls, 40 runs off which came from fours and sixes, while at the other end Mominul was batting on one off 30 balls.

Tamim did survive one close call when he was batting on 29 when he fiercely struck an off-spin delivery from Dhananjaya but the ball ricocheted off the silly point fielder and was pouched by wicketkeeper Dickwella.

Mominul also survived a referral of the same bowlers, as the third umpire upheld the on-field umpire’s not out call on a leg before wicket appeal.

Previously, Nazmul and Mominul made 163 and 127 while Tamim and Liton Das made 90 and 50 to help the Tigers reach 541-7 in their first innings after opting to bat first.

After Bangladesh finally declared their innings after batting for almost seven sessions, the Sri Lankan batters exhibited a similar domination.

Sri Lanka went into the fourth day on 190-3 and ended the day on 512-3 with Karunaratne and Dhananjaya unbeaten on 234 and 154 respectively.

The match was almost certain to end in a draw after both teams couldn’t finish their respective first innings in the first four days unless something drastic happened on the final day, which ultimately didn’t happen.