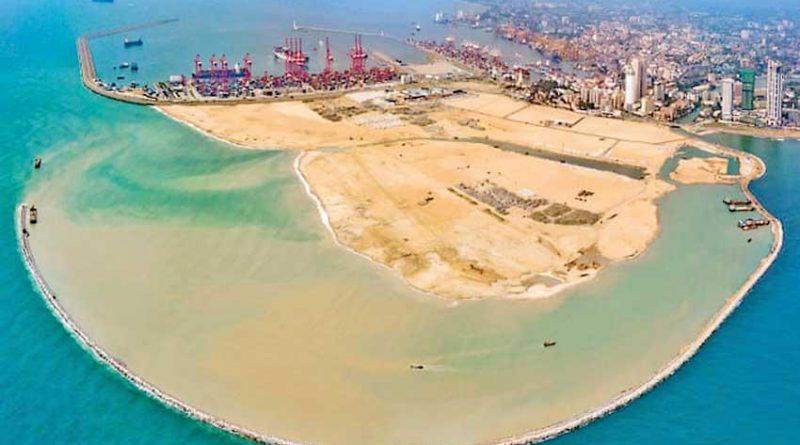 Estimates Port City would generate over 300,000 new jobs and US$ 10bn in fresh direct investments
To have positive impact on SL’s BoP; to generate US$ 5.2bn in revenues via tax incomes and land leases
Cautions against any delays, as such could affect investment flows not only to Port City but also elsewhere in Sri Lanka
Say a clearly defined regulatory policy framework would be key to the success of Colombo Port City
The Colombo Port City (CPC) project is estimated to add a mammoth US$ 30 billion in fresh economic output to Sri Lanka’s gross domestic product through 2041, propelling the country towards the developed country club, according to a study by PricewaterhouseCoopers (PwC). Sri Lanka’s current gross domestic product (GDP) is estimated to be around US$ 84 billion.

If the Sri Lankan economy is projected to grow at a more conservative rate of 5.0 percent every year during the next two decades, Sri Lanka is poised to have an economy with the size of US$ 223 billion sans Port City.

With Port City, the size of the Sri Lankan economy will be between US$ 250 billion and US$ 300 billion in 20 years. This is because the Port City project will generate positive externalities to the mainland, adding an impetus to its otherwise generic growth prospects.

In their study, which analyses the Port City’s economic impact through its three key stages, namely: stage of reclamation; infrastructure development and land lease, construction stage; and operations stage, PwC estimates that the project would generate over 300,000 new jobs and US$ 10 billion in fresh direct investments through these stages during the next 20 years, resulting in positive impact on Sri Lanka’s balance of payment.

While there will be outflows due to importation of materials for construction, repatriation of profits and wages of foreign employees, PwC is of the view that such outflows would be offset by the earnings from export of services and tourism spending in the Port City, leading to a positive impact on the balance of payment when the project is in operation.

Debunking claims by certain parties that the incentives and tax concessions on offer are way too generous, PwC estimated that the project through its entire life would generate a whopping US$ 5.2 billion in revenues via tax incomes and land lease, adding much needed heft to the government coffers and closing the budget gap.

“The Port City Project will have a significant impact on the national economy, in terms of employment generation, attracting FDIs, GDP contribution, BOP, and government revenue when it progresses as planned,” the report noted.

However, PwC cautioned against delays in construction and any negative developments and barriers against the project, which could affect the direct investments flows, not just to the Port City but also into other projects elsewhere in Sri Lanka.

However, the Colombo Port City Economic Commission Bill, which was presented to Parliament recently, has been met with severe opposition.

The country’s main Opposition political party, Bar Association of Sri Lanka and a number of civil society organisations have already gone to the highest court in the country against the Bill, alleging that it violates Sri Lanka’s sovereignty.

Some also claim that the Port City will be a Chinese colony, which the government has vehemently refuted, saying that Port City has already been gazetted as part of Sri Lanka.

The PwC report specifically noted that a clearly defined regulatory policy framework would be key to the success of Colombo Port City.

“In this context, it would be beneficial to have a clearly defined regulatory policy framework for Port City, as this would support the achievement of the project’s potential and contribution towards the economy,” said PwC, which was engaged by the project company, CHEC Port City (Pvt) Limited, to undertake the study.