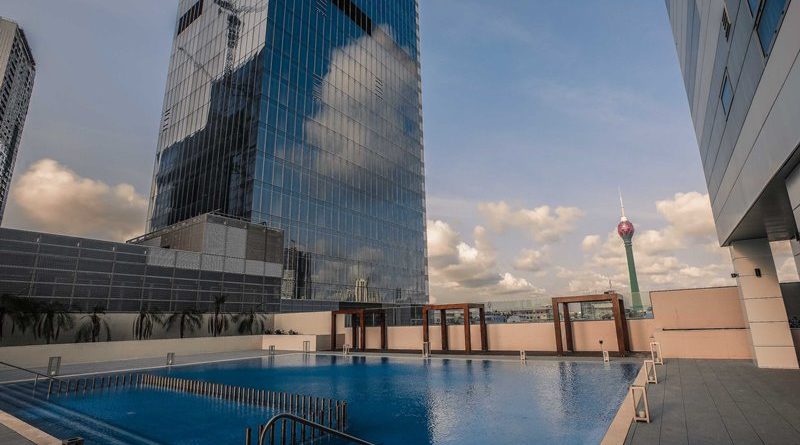 Cinnamon Life, John Keells Properties’ iconic mixed-development project, is ever closer to redefining Colombo’s skyline with the completion of its plush residential tower ‘The Suites’ at Cinnamon Life and the state-of-the-art office tower, ‘The Offices’ at Cinnamon Life.

With its construction now complete, the 196-unit apartment building and the 30 storey office tower were ceremoniously handed over to John Keells Holdings (JKH) Chairman Mr. Krishan Balendra by Mr. T.H. Kim – Project Director of the Contractor HKN (a joint venture between Hyundai, Keangnam and Nawaloka).

Speaking at the event, Mr. Balendra said the completion of ‘The Suites’ and ‘The Offices’ at Cinnamon Life heralds a new beginning for the city of Colombo.

Noting that the apartment buildings and the offices are a key feature in its mammoth integrated development project, the JKH chairman said, once completed, Cinnamon Life will rival anything that the South Asian region has to offer.

“John Keells Holdings first conceptualized Cinnamon Life in 2010. Operating Cinnamon Grand and Cinnamon Lakeside, two large five star hotels, we knew that Colombo didn’t have the facilities to host large regional events. Cinnamon Life with its 800 roomed hotel, multiple banqueting and conferencing spaces and retail space is now positioned to host some of the biggest events in the region, particularly in South Asia,” he said.

“It’s the largest private investment in Sri Lanka to date, and with its completion in the next year, we expect that Cinnamon Life will position Colombo as the leisure, entertainment and retail epicentre of the South Asian region,” he added.

Mr. Balendra further added “These are challenging times, not just for us but for the world as a whole. With the right attitude, however, no challenge is insurmountable and as we, together with HKN, have ably demonstrated with the completion of these two towers.”

Sector Head of John Keells Properties and Executive Vice President (JKH), Mr. Nayana Mawilmada who also spoke at the event said Cinnamon Life, once completed, will rank amongst Asia’s most celebrated pieces of architecture, not unlike the Burj Khalifa in Dubai and the Marina Bay Sands in Singapore. “As an incredibly iconic and unique signature structure, Cinnamon Life is going to fundamentally change the way Colombo is perceived,” he said.

“I think on many fronts this project will take us to the next level. That was the founding philosophy of Cinnamon Life. Taking Sri Lanka out to the world is an ambition that is at the heart of the project. It’s incredibly exciting today to be at this point where we’re now in the home stretch. I think Cinnamon Life is going to be transformational in ways that many of us don’t anticipate,” he said.

A ‘city within a city’, Cinnamon Life aims to be the lifestyle capital of Colombo and promises to deliver a vibrant lifestyle experience at every touchpoint. In addition to the 800-roomed luxury Cinnamon hotel and the premium residential apartments, the property will boast one of the city’s premium retail and entertainment malls, modern office spaces that meet the highest of international corporate standards, among a number of other state-of-the-art amenities and attractions.