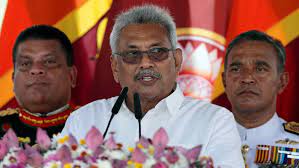 President Gotabaya Rajapaksa has said that 196 new police stations will be set-up as part of establishing law and order in the country.

Issuing a statement, the President’s Media Division noted that 10,000 police officers will be recruited to service as well.

During a meeting, the President had said that steps will be taken to allow the families of war heroes to received allowances and salaries throughout their lifetime.

He had added that a national policy has also been formulated to combat the narcotic menace in the country and that it would be published in due course.

State minister Chamal Rajapaksa, Defence Secretary General Kamal Gunaratne, the commanders of the tri-forces, and the police chief were present at the meeting.

One thought on “LNP – 196 new police stations to be set-up : President”