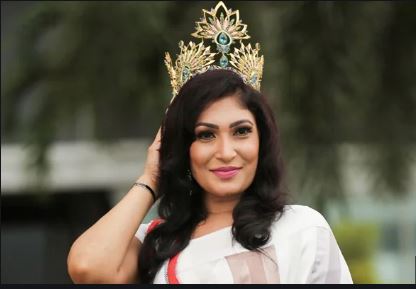 The winner of Mrs Sri Lanka for Mrs. World, Pushpika de Silva has said that she may enter politics in the future. This may be possible now that Pushpika has received widespread publicity following the brawl on Sunday evening, which left her in tears in front of cameras.

While answering a question raised by a journalist during a media briefing at the Shangri-La Hotel, Pushpika, after initially struggling to control her tears in front of the cameras, said that although she had no immediate plan for politics, she had to fulfil her duties for the crown, she may enter the political stream in the future.

Pushpika, however admitted that she had a political past following her numerous visits to political rallies in Polonnaruwa and obtained nominations from the Polonnaruwa District.
“Contesting at the General Election from Polonnaruwa District is very hard, because it was an enormous challenge for me, since the former President contested from that District,” she said.

“However I am hoping to enter politics someday,” she said adding that if she gets a chance, she would enter politics to talk on behalf of women and children in
the country.

Pushpika, who a day earlier looked frail, lying on a hospital bed claiming she had suffered scalp injuries after her crown was forcibly removed by the reigning Mrs. World Caroline Jurie, looked all healthy in front of the cameras within 24 hours and even broke down stating that she was not divorced and her separation must not be highlighted.