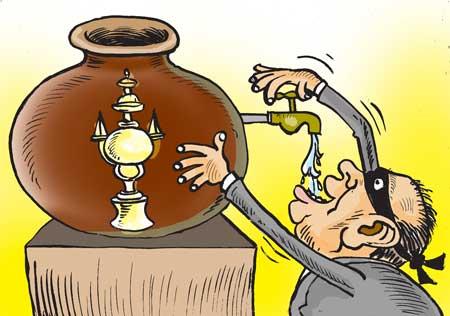 The 25th anniversary of the Sri Lanka team winning the 1996 cricket world cup was celebrated at an impressive ceremony held at Temple Trees the other day.

All players of the cup winning team except Sana who was participating in the Legends series in India had attended this glittering ceremony organized under the patronage of the country’s Number Two.

Arjuna on this occasion had created a sensation when he said that he felt like walking away from the ceremony when he saw some faces there.

A piece of news that went viral shortly following this event had raised many an eyebrow and a frown in various quarters: that a certain bigwig of the game’s administration had submitted a hefty bill to claim the expenses incurred in connection with the celebration and pocketed the money!

And the bigwig who billed for the expenses was one of the faces that Arjuna referred to in his acid remark, they say.