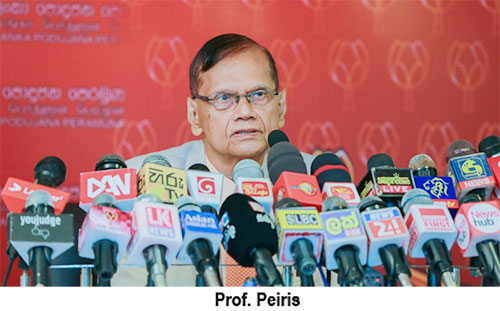 SLPP Chairman Prof. G. L. Peiris yesterday (29) asked whether the UK would hand over wartime dispatches (January-May, 2009) from its High Commission in Colombo to the proposed special unit tasked with gathering information and evidence, attached to the UN Human Rights High Commissioner’s Office.

The resolution adopted last Tuesday (23) authorized the High Commissioner’s office to set up a special unit to gather information and evidence on human rights violations in Sri Lanka. According to the resolution the new unit was meant to “strengthen the capacity of the Office of the High Commissioner to collect, consolidate, analyze and preserve information and evidence and to develop possible strategies for future accountability processes for gross violations of human rights or serious violations of international humanitarian law in Sri Lanka, to advocate for victims and survivors, and to support relevant judicial and other proceedings, including in Member States, with competent jurisdiction” (operative clause 6).

One-time External Affairs Minister Prof. Peiris said the UK as the leader of the Sri Lanka Core Group that spearheaded the latest initiative to introduce a new resolution, owed an explanation why such documents had been suppressed over the years. “The existence of British diplomatic cables which contradicted their accusations directed at Sri Lanka military as well as the political leadership came to light in Oct 2017,” Prof. Peiris said.

Addressing the media at the Waters Edge, Prof. Peiris said that the UNHRC had been in such a hurry to allocate funds to the tune of USD 2.8 mn for the proposed unit. Prof. Peiris, who holds the education portfolio emphasized that it would be the responsibility of the new office to obtain the British dispatches.

The top academic, who had even taught law at a leading British university, also questioned the rationale in the UK being a member of the UNHRC fighting a near three year-old legal battle to prevent the release of dispatches sought by member of House of Lords, Lord Naseby. The Conservative party member was given only a section of the dispatches, Prof. Peiris said.

Minister Peiris said that the House of Commons was recently told the UK government didn’t hand over those dispatches nor the UNHRC asked for them. Prof. Peiris said that the proposed unit comprised three Legal Advisors, two analysts, two investigators/human rights officers, one information and evidence officer, two Juris-Linguists, one victim support officer and one programme assistant. Prof. Peiris said that the team had been tasked with putting in place information and evidence gathering mechanism therefore the need to examine everything available could not be ruled out.

The former head of the Colombo Law Faculty said that the proposed mechanism should be examined against the backdrop of the so called evidence/information gathered by the then UNSG Ban Ki-moon’s Panel of Experts’ remained covered by UN confidentiality clause till 2031. An internal UNHRC memo dated March 22, 2021 readout before the adoption of the resolution revealed that the new unit was tasked with coordinating with member states as regards universal jurisdiction and extraterritorial jurisdiction cases and other accountability purposes. The new unit is expected to function for a period of 12 months (Oct-Dec 2021 and January-Sept 2022). The memo revealed that the Office of the HR Commissioner intended to develop an efficient strategy meant to pave the way for individual countries to take action. The UK received the appointment as Sri Lanka Core Group leader in 2018 after the US quit the UNHRC alleging the UN body was a cesspool of political bias.

Prof. Peiris said that it would be interesting to see whether those tasked with gathering war crimes evidence would seek a meeting with Adele Balasingham, wife of the late LTTE theoretician Anton Balasingham now living in the UK. At the onset of the briefing Prof. Peiris said that efforts to drag Sri Lanka before the International Criminal Court were futile. “We are not party to the Rome Statute,” Prof. Peiris said, Sri Lanka was confident China and Russia would thwart any attempt to secure a UN Security Council endorsement of specific actions against Sri Lanka. The US imposed travel restrictions on Army Commander Gen. Shavendra Silva and his family in Feb 2020 whereas Field Marshal Sarath Fonseka, Maj. Gen. Chagie Gallage were among those denied visas to the US and Australia, respectively.

The UK had been partial in the whole process and recent efforts to ensure immunity to UK forces deployed within the country or overseas revealed the double standards, the internationally renowned law academic charged.