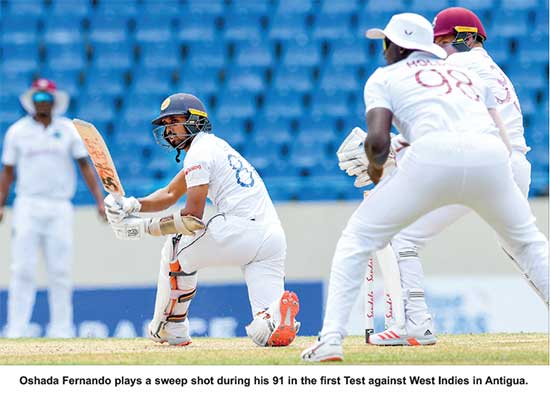 After a poor start in the first Test against West Indies, Sri Lanka fought back on day three to finish on 255 for four on Wednesday at Sir Vivian Richards Stadium in Antigua.

A 162 run stand for the second wicket between Oshada Fernando (91) and Lahiru Thirimanne (76) helped Sri Lanka defy West Indies bowlers and gain a lead of 153 runs with six wickets in hand.

Fernando tipped as the nation’s best player against fast bowling was unlucky to miss out on a second Test hundred. He faced 149 deliveries for his 91 and hit 11 boundaries.

Opener Thirimanne meanwhile backed up his first innings 70 with another classy 76 as Sri Lanka fought hard to regain the initiative.

The tourists were blown away for 169 runs after being put into bat first as Jason Holder picked up five for 27.

Suranga Lakmal was on the money during the West Indies first innings and finished with career best figures of five for 47. The seamer who turned 34 this month has had a tough four months. He travelled to South Africa hoping to be fit for the first Test but was ruled out of both Tests and failed to recover for the opening Test against England in Galle. Then he was caught on camera playing card games during the match and came in for intense criticism.

Lakmal bowled so well during the West Indies first innings and richly deserved his fourth five wicket haul. He has been excellent in Test match cricket since 2018 having averaged 23 way below his expensive career average of 37.

With 156 wickets to his credit, Lakmal is now Sri Lanka’s second most successful seam bowler behind the peerless Chaminda Vaas.

West Indies resumed day three on 268 for eight and were able to add just three runs to their overnight score as Vishwa Fernando knocked off the last two batters.

Sri Lanka needed more than just two batters to click if they were to set West Indies a decent target and Dhananjaya de Silva (44*) and Pathum Nissanka (21) were involved in an unbroken 66 run stand for the fifth wicket.