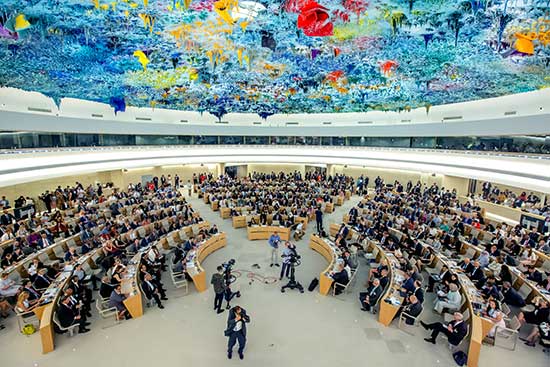 * Russia, China, Pakistan, Bangladesh and the Philippines stand with Lanka

Of the 47 countries, 22 voted for the resolution, and 11 voted against it with 14 abstaining. Sri Lanka is not a member of the UNHRC. The US, which is also not a UNHRC member, declared its support for the resolution.

The resolution was the first to be put to the vote in keeping with the e-voting procedures established for the UNHRC 46th Session, which has been held virtually. On behalf of Sri Lanka, China called for a vote after Sri Lanka’s efforts to reach a consensus on the resolution proposed by the UK-led Core group failed.

In the run-up to yesterday’s vote, the government requested India to back Sri Lanka.

Foreign Secretary retired Admiral Jayanath Colombage is on record as having said that the government requested Premier Modi, in writing, to throw its weight behind Sri Lanka.

Yesterday’s defeat was the fourth suffered by Sri Lanka at the UNHRC since 2012. Sri Lanka brought the war to a successful conclusion in May 2009.

Asian nations China, Pakistan, Bangladesh and the Philippines voted against the resolution along with Russia, Cuba, Venezuela, Bolivia, Eritrea, Somalia and Uzbekistan.

South Korea in spite of close relations with

Sri Lanka voted against the country at the behest of the US.

Along with India, Japan-both members of the US led military alliance against China abstained. Nepal and Indonesia, too, regardless of their close relations with Sri Lanka succumbed to pressure to skip the vote. Other countries to abstain were Bahrain, Burkina Faso, Cameroon, Gabon, Libya, Mauritania, Namibia, Senegal, Sudan and Togo.

The resolution calls for the Office of the High Commissioner for Human Rights to enhance its monitoring and reporting on the situation of human rights in Sri Lanka, including progress on reconciliation and accountability, and to present an oral update to the Human Rights Council at its forty-eighth session, as well as a written update at its forty-ninth session, and a comprehensive report that includes further options for advancing accountability, at its fifty-first session, both to be discussed in the context of an interactive dialogue.

The resolution also urged the Office of the High Commissioner and relevant special procedure mandate holders to provide, in consultation with and with the concurrence of the Government of Sri Lanka, advice and technical assistance on implementing the above-mentioned steps.

The EU member states and those aligned with US led Western powers either voted for the resolution or abstained.