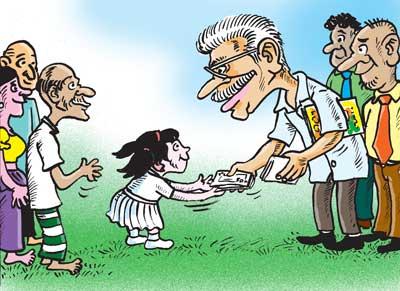 The Number of One of the country as a matter of tradition does not do money transactions when he is on official visits. He does not even carry a purse with him.

A certain political figure in our country when functioning as the Number One went on pilgrimage to Kataragama. He did not have cash in hand to make the customary ‘panduru’ ( cash offering) as he was not carrying a purse. When he looked around, he saw a security officer behind him, and he borrowed some cash from the latter to make the offering. Well! That is an old story.

Quite recently our current Number One visited a village in Wayamba under his ‘Gama Samaga Pilisandara’ program.

When the Number One was having a cordial chat with the villagers, a young girl of the school going age who came up to him presented to him a copy of a book written by her. “What is the price of this book?” Number One asked the girl.

The girl smiled but made no reply. Number One reached inside his pocket for his purse, pulled out a Rs. 5,000 note and offered it to the girl.

Number One was able to offer a cash gift to the young girl in return for her present as he was carrying a purse departing from the tradition of his predecessors.