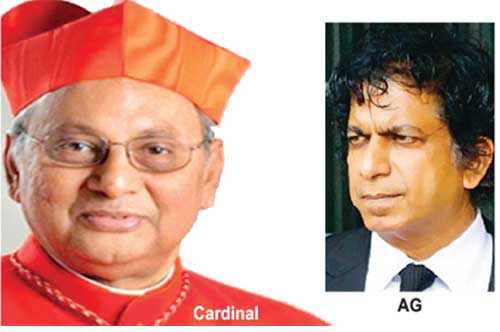 Attorney General Dappula de Livera, PC, has informed the Archbishop of Colombo Malcolm Cardinal Ranjith that it is futile to proceed with the 2019 Easter Sunday case unless he receives access to all volumes of the Presidential Commission of Inquiry (PCoI) report, and the Criminal Investigation Department (CID) completed its investigations into the attacks.

The AG met the Archbishop on Monday (8).

The meeting took place against the backdrop of the PCoI decision to deny the AG access to 22 volumes out of 87 on the basis that they contained sensitive information, the disclosure of which could be detrimental to national security.

Coordinating Officer to AG State Counsel Nishara Jayaratne yesterday revealed that the AG had told the Cardinal that as the final report received by him didn’t provide any specific information or evidence regarding the Easter Sunday mastermind, conspirators and those directly or indirectly involved, the need to examine all volumes was of pivotal importance.

The meeting led to an extraordinary gathering of the Catholic Bishops Conference of Sri Lanka the following day and public demand for the immediate releasing of what the P CoI called sensitive documents. The Island learns that each volume consists of approximately 600 pages.

State Counsel Jayaratne said that the AG had also instructed IGP C.D. Wickremaratne to investigate four persons, including Sara Jesmin, the wife of Katuwapitiya bomber Hastun. And the others referred to in the final report of the PCoI namely Abu Hind, Lukman Thalib and Abu Abdullah Rimzan.

In spite of claims that Sara Jesmin managed to flee the country and perhaps now living in India, the government hadn’t been able to trace her whereabouts.

The AG had assured the Cardinal that he would do everything possible to bring the proceedings to a successful conclusion. However, the success of the investigation and the subsequent legal proceedings very much depended on his department receiving access to all documents, he stressed.

The AG, in respect of the writ application filed by the Cardinal, has directed the IGP to conduct a thorough investigation into the importation of swords, daggers and similar weapons into the country before and after the Easter Sunday attacks.

State Counsel Jayaratne said that the AG had briefed the Cardinal on the status of ongoing investigations.