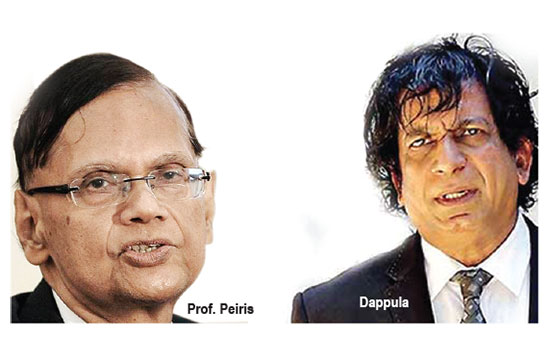 AG won’t be given ‘sensitive’ volumes

The Presidential Secretariat has declined to release 22 volumes (each containing about 600 pages) of proceedings to Attorney General Dappula de Livera, PC, on the advice of the Presidential Commission of Inquiry (PCoI) that probed the 2019 Easter Sunday carnage.

Authoritative sources told The Island that of the 87 volumes, the Presidential Secretariat yesterday (2) had sent only 65 to the AG. The Attorney General has been informed that the PCoI is of the opinion that 22 volumes shouldn’t be disclosed due to the sensitive nature of the information therein relating to national security.

The Attorney General received the final volume of the report from the PCoI last week.

There were shortcomings in the Presidential Commission of Inquiry (PCoI) report on the Easter Sunday carnage in 2019, but it couldn’t be discarded, Education Minister and SLPP Chairman Prof. G.L. Peiris told the media on Monday (1).

Fielding questions at the weekly media briefing at Battaramulla, Prof. Peiris acknowledged the flaws while emphasising the need to go ahead with the judicial proceedings.

Prof. Peiris said that the PCoI made far reaching recommendations that had to be dealt by the Office of the President (executive), legislature and the judiciary. In addition to them, there were specific recommendations to the Attorney General’s Department and the CIABOC (Commission to Investigate Allegations of Bribery or Corruption).

The minister stressed that deficiencies in the P CoI report certainly made a valuable contribution towards helping the government to ascertain the gruesome truth.

Prof. Peiris made reference to some ‘clouded’ recommendations among some far reaching ones.

Prof. Peiris dismissed the notion that the P CoI had recommended specific actions against various persons and organizations named in the report. The P CoI lacked such power; Prof. Peiris explained that the Attorney General would move court on behalf of the government. The findings made by the P CoI would be used in the process, Prof. Peiris said. The minister assured the public the government wouldn’t interfere in the investigations.

The SLPP Chairman rejected accusations that the government exploited the P CoI report to undermine coalition partner SLFP. Such criticism was unfair as the government had nothing to do with the setting up of the P CoI in the run-up to the Nov 2019 presidential election.

The then President and SLFP leader Maithripla Sirisena formed the P CoI close on the heels of Parliamentary Select Committee (PSC) that probed the Easter Sunday carnage handing over its report in the third week of Oct 2019.

Prof. Peiris appreciated the recommendations made in respect of the education sector. The Minister said that the failure to ensure strict controls on madrasas could cause a catastrophe.

One-time External Affairs Minister said that the government wanted to ensure no holds barred investigation into the worst atrocity since the conclusion of the war in May 2009. The ministerial committee would facilitate the government initiative, the minister said, urging the Opposition not to politicize the issue at hand.

Responding to another query, Prof. Peiris said that the SLPP would make its position clear on the P CoI report after having studied it. The Minister criticized efforts made by some persons with vested interests to condemn the report. Those who had been affected by P CoI’s findings and recommendations were likely to attack it, the minister said. The public wouldn’t be deceived by such criticism, the minister said, underscoring the fact that Easter Sunday carnage could have been thwarted if the previous government responded sensibly to specific intelligence received from India. Unfortunately, they played ‘pandu’ with national security at the expense of the public.

Nearly 270 persons perished in near simultaneous attacks. Approximately 500 others received injuries and quite a number of  them maimed for life.