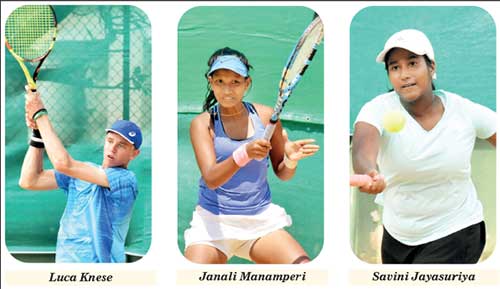 Vibuda Wijebandara turned tables on experienced Sankha Atukorale to make the men’s singles final a battle between emerging players as he triumphed over the 33-year-old in his semi-final at the SSC Open Ranking Tennis tournament in Colombo on Saturday.

Atukorale, who was seeking his first title of the year, was the only senior player to compete in the men’s singles semi-finals and he was beaten 6-4, 0-6, 6-4 by the 20-year-old Wijebandara. The other semi-final which was played between teenagers Luca Knese and Kiran Vairavanathan was won by the former who scored 6-2, 6-1.

Atukorale was also the only semi-finalists from the last Nationals featured in this tournament.

Wijebandara will meet Knese, the men’s singles winner of the recently held 105th Colombo Championships in the final.

In the women’s singles Savini Jayasuriya beat Tania Doloswala 6-1, 6-2 to advance to the final. She is set to meet Janali Manamperi, the runner up at the last Nationals. Manamperi ended young aspirant Dinethya Dharmaratne’s notable winning streak in the semis to book her berth in the finals. She scored 6-0, 6-0 against Dharmaratne, who despite the defeat had many positives to take home from the open category tourney. The 15-year-old stunned a couple of experienced players to book her semi-final berth. In the morning Dharmaratne also advanced to the quarter-finals of the under-16 singles with a 6-1, 6-0 win over Senulya Wijayawardane.