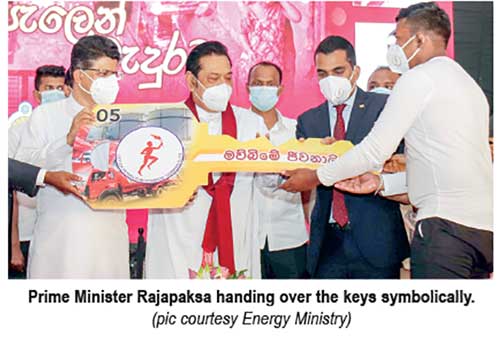 The government has allocated Rs 500 mn for relocating squatters who prevented the laying of new underground pipelines from the Colombo Port to the Kolonnawa Oil Storage Facility.

This was revealed at an event attended by PM Mahinda Rajapaksa and Energy Minister Udaya Gammanpila at the Ceylon Petroleum Storage Terminals Ltd., where 112 families received keys to new houses.

The Treasury and the Ceylon Petroleum Corporation have financed the acquisition of houses belonging to the Urban Development Authority (UDA).

In addition to the old pipeline from the Colombo to Kolonnawa, the government has laid five new parallel underground pipelines and is in the process of laying down two more.

The Energy Ministry said that squatters over a period of 35 years had built houses and other structures on the old pipelines and thereby prevented renovations or laying of new pipelines, the ministry said.

At Tuesday’s post-cabinet media briefing, co-cabinet spokesman Udaya Gammanpila said that the CPC had been on the verge of bankruptcy since 2008 and the institution was in debt to the tune of Rs 600 bn and owed Rs 100 bn to various suppliers.