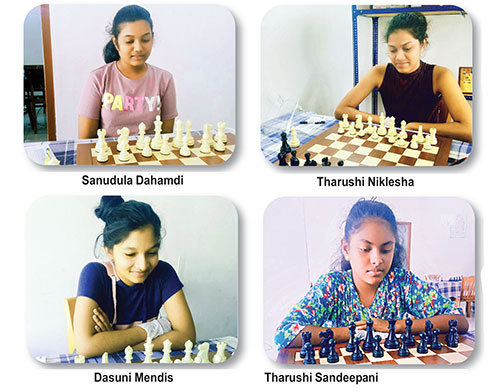 Sanudula Dahamdi of Mesaeus College scored back to back wins in the fifth and sixth rounds to take the lead at the halfway mark of the Sri Lanka Women’s Chess Grand Prix 2021 at the Chess Federation headquarters, Nugegoda over the weekend.

Dahamdi beat Gaveshi Wickramarathne and Naduni Abeywardena in the fifth and sixth rounds to increase her aggregate to five points in six games. Sanudula, who is one of the strongest Youth Girls players in Sri Lanka will face her next opponent when the competition recommences on Friday.

The Sri Lanka Women’s Chess Grand Prix 2021 is conducted by the Chess Federation of Sri Lanka from February 13 to 21. Winners will take away Rs. 70,000.00 as cash rewards. Only the top 12 players in the country are participating in this event which is conducted on Round Robin basis for 11 rounds.

After six rounds Tharushi Niklesha of Visakha Vidyalaya, who drew with Gaveshi Wickramarathne, an upcoming player, is in the second place with 4 ½ points. She beat her schoolmate Pasindi Wijesuriya in the fifth round.

The next rounds will be held from February 19 to 21.