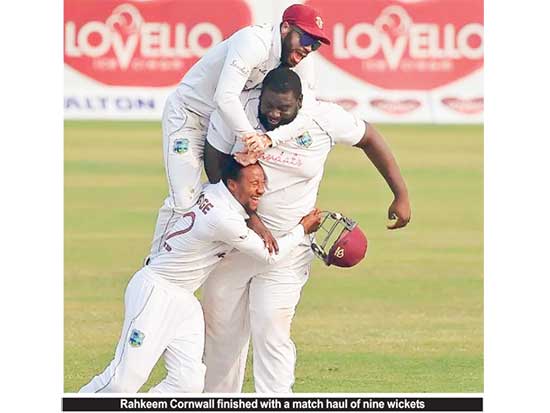 A total of 17 wickets fell across two innings, Tamim Iqbal made a stroke-filled 44-ball half-century, and West Indies captain Kraigg Brathwaite turned out to be one of the unlikely bowling heroes on a day dominated by spinners, as West Indies held on for a 17-run win to seal the series 2-0.

However, that West Indies were able to wrest control of a middling 231-run chase for Bangladesh was largely down to the superb exploiting of the turn and bounce on a deteriorating Dhaka pitch by Rahkeem Cornwall, who led the charge as West Indies claimed the Test in an extended final session, wrapping up their first overseas series win since 2017.

The win was sealed almost 35 minutes past the scheduled close of play, with Jomel Warrican spinning one sharply from a length outside off as Mehidy Hasan Miraz, who had started a late attack when he was running out of partners, shaped to defend. The edge was travelling low to the right of Cornwall – who else – and the big man dived to his right to pluck out a catch, sparking off big celebrations in the away camp.

Iqbal had raised visions of a Bangladesh win with his half-century, hitting eight of the nine boundaries struck in an opening stand that raised 59 off the first 12 overs of the chase. He drove fluently against seam, and chipped down the wicket against Cornwall, and swept Warrican with ease. Sensing the need for a change, Brathwaite brought himself on, and removed Sarkar off his first ball, tempting him into a poke outside off, that took wicketkeeper Joshua Da Silva’s pads and fell to Cornwall at slip. Four overs later, the captain tempted Iqbal into a lofted shot towards cover, and on the stroke of tea, Cornwall got one to jump off a length to Najmul Hossain Shanto, taking his glove and then his body before dropping to short leg.

After the tea break, the captain Mominul Haque and Mushfiqur Rahim briefly appeared to have taken charge of the chase, putting together 23 runs and eschewing risks while facing up to the spin of both Cornwall and Brathwaite. An inspired bowling change came in the shape of Warrican, who got the second ball of his spell to draw Rahim forward, spin across, taking a feather edge through to Da Silva. Bangladesh were left at 115 for 5 when Mohammad Mithun, who had spanked a six by chipping down the wicket, was picked up at leg gully off Cornwall to a ball that turned and bounced across him.

Mushfiqur Rahim edged one from Jomel Warrican through to Joshua Da Silva  AFP/Getty ImagesJoined by Liton Das, Haque was able to bring the target down to double figures, but appeared anxious to increase the scoring rate, going down the wicket and lofting the ball into vacant spaces on the on side on a couple of occasions. Eventually, he fell to a catch at leg gully as well, Warrican claiming two of three wickets for the day. When Das was smartly caught by Da Silva for 22, and Taijul Islam misjudged a quicker one fired in straight at him, both to Cornwall, the end seemed near at 163 for 8.