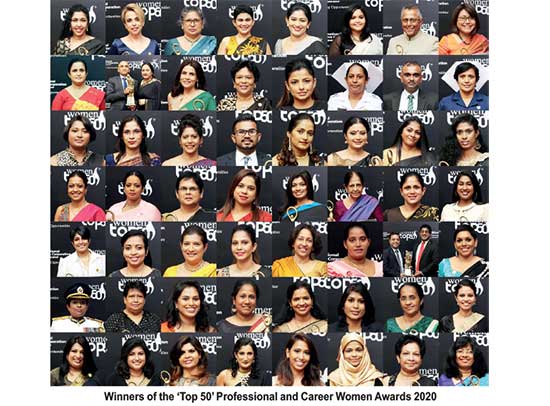 As an avid supporter of bridging gender disparities while empowering women in the workforce, Dialog Axiata PLC (Dialog), Sri Lanka’s premier connectivity provider joined hands as Platinum Sponsor on the 10th anniversary of WIM’s  (Women in Management) foremost annual event the ‘Top 50’ Professional and Career Women Awards, to recognize and celebrate individual and corporate achievements of trailblazing women leaders in Sri Lanka for the year 2020.

Recognizing and valuing legacies which will, in turn, inspire others, the awarding body has recognized over 420 past award winners over the years, representing a wide array of professions including banking and finance, hospitality, media, legal, logistics and supply chain to name a few.

The ‘Top 50’ Professional and Career Women Awards,’ demonstrates the significant role women play in bringing about transformational change as employees, entrepreneurs, and business leaders going to show that gender equality is not only a social and moral imperative, but it also makes business sense. At Dialog, it is paramount that women are given the supportive platforms needed to be recognized and valued. Under the Dialog’s community investment umbrella, Yeheli.lk/Thozhi.lk – the first of its kind free digital, anonymous, trilingual messaging platform in Sri Lanka which connects users with expert advice, is one such example of Dialog’s commitment to the welfare of women as it is dedicated to assisting women’s health and wellbeing thereby enabling and empowering them to participate in the economy and society in order to build a sustainable future for the country.

Dialog is also the proud sponsor of the Women’s National Cricket Team of Sri Lanka as well as the Sri Lanka National Netball, Senior Netball, and Junior Netball Teams. The company also has close ties with the Dialog National and Junior National Netball Championship and is working together with its brand ambassadors, Umaria Sinhawansa, Stephanie Sansoni and Chamari Atapattu to create a culture of female empowerment and inclusivity across its portfolio.

Launched in March 2011 by WIM, ‘The Professional & Career Women Awards’ celebrates the achievements of remarkable women who inspire those around them – either through the media, through their astounding achievements in their careers, businesses and everyday lives. The annual event is an uplifting and emotional award ceremony where women are celebrated equally in one room.