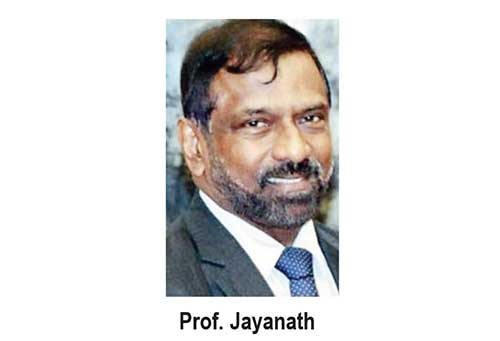 Foreign Secretary Admiral Prof. Jayanath Colombage on Monday (25) night revealed that the government was having discussions with the UK-led Sri Lanka Core Group in a bid to explore the possibility of reaching a consensus on what he described as a ‘consensual resolution’ ahead of the 46th sessions of the Geneva-based United Nations Human Rights Council (UNHRC) scheduled for Feb-March this year.

Admiral Colombage acknowledged that an agreement on a consensual resolution was a politically challenging task. FS Colombage said so in conversation with Faraz Shauketaly on ‘News Line’ on TV 1.

Asked whether the government was under pressure to co-sponsor the new resolution or face a vote in case Sri Lanka rejected the UK-led move, the naval veteran said there was dialogue between the two parties in this regard. Talks have to be concluded today (27)

Prof. Colombage ruled out the possibility of Sri Lanka co-sponsoring the new resolution. The top Foreign Ministry official also dismissed the interviewer’s assertion the government was under pressure to accept the new resolution.

Admiral Colombage said they were also studying some suggestions made by the Core Group.

Asked whether the government would try to convince the Tamil National Alliance (TNA) led political grouping that had demanded an international war crimes investigation in addition to a range of punitive measures to reverse its decision, FS Colombage emphasized that Sri Lanka waged war against an internationally proscribed terrorist group.

Declaring that serious war crimes hadn’t been committed during the war, FS Colombage questioned the motives of those continuing to harp on unsubstantiated war crimes allegations. Referring to the failure on the part of the Northern Provincial Council to spend the funds allocated for the benefit of the public, FS Colombage asked whether an agenda detrimental to post-war national reconciliation was being pursued.

In the wake of Sri Lanka quitting in Feb 2020 Geneva Resolution co-sponsored by the previous government against one’s own country in Oct 2015, Geneva has warned Sri Lanka of serious consequences. In addition to freezing assets and travel bans slapped on those who had been ‘credibly accused of human rights violations,’ Geneva recommended the launch of criminal proceedings at the International Criminal Court and an international mechanism to gather evidence.

Asked whether the recent appointment of a three-member Commission of Inquiry (CoI) chaired by Supreme Court Judge Nawaz to examine previous CoI reports et al wasn’t too late as well as insufficient just ahead of the 46th sessions, Admiral Colombage explained how eruption of first Covid-19 wave that resulted in the postponement of general elections scheduled for April 2020 caused serious setback to government efforts.

Commenting on simmering controversy over the Sri Lanka-India agreement on the East Container Terminal (ECT) at the Colombo harbour, Admiral Colombage expressed confidence the issue could be resolved soon. The former Navy Chief categorically denied India’s valuable support to Sri Lanka at Geneva et al would be linked with agreement on ECT.

FS Colombage emphasized that Sri Lanka’s bilateral relations wouldn’t be at the expense of another country.

Admiral Colombage regretted the recent mid-sea collision involving an SLN Fast Attack Craft and an Indian fishing trawler that resulted in the deaths of four fishermen. The FS emphasized that the incident happened well within Sri Lankan waters near Delft Island.

Navy headquarters last week alleged that the Indian vessel collided with FAC while trying to flee a naval cordon.

Admiral Colombage said that the SLN vessel would have suffered serious damage if the Indian trawler happened to be one with a steel hull.

Asked whether US, India, Japan and Australia would take a common stand vis a vis Sri Lanka in respect of accountability issues, Admiral Colombage asserted that wouldn’t be the case. “Sri Lanka is important to them” Admiral Colombage said, while describing them as the four pillars of the Quad-a security alliance.

Commenting on the disclosures made by Lord Naseby in the House of Lords in Oct 2017, Admiral Colombage appreciated the British politician’s efforts to set the record straight as regards war crimes accusations. The Foreign Secretary said that the revelations were made on the basis of genuine and accurate sources.

The British Lord used classified wartime British HC cables (Jan – May 2009) obtained following a legal battle to counter Geneva accusations. Sri Lanka is yet to officially request Geneva to revisit the 2015 resolution on the basis of Lord Naseby’s revelations.