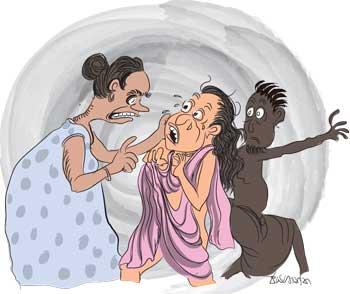 This 28-year-old housewife, on hearing that her husband, a security officer on duty at a far away  place, had been admitted to hospital with a sudden illness, set out to visit him carrying her five month-infant together with a friendly lady from the neighbourhood who volunteered to accompany her.

By the time they reached the hospital, the husband had been discharged, and the couple decided to spend that night at the official quarters of the husband and return home together the following day. The housewife introduced the friendly lady who accompanied her to her husband as ‘game akka’.

Once at the official quarters of the husband, when it was time for them to retire for the night, the housewife arranged another room of the bungalow for the ‘game akka’ to sleep.

At midnight, the housewife was woken by the crying of the baby and incidentally found her husband who was sleeping with her missing. On hearing a sound from the adjoining room, she peeped inside through the door left ajar and saw the friendly lady, fully naked hurriedly moving to a corner to hide. Her husband, in the meantime, rushed out.

The housewife who turned furious began attacking the ‘ape akka’ with some empty bottles she could lay her hands on. And she was shouting as if she had gone insane.

The security officers residing in the other official quarters nearby, on hearing the racket, arrived in a few minutes to find out what the hullabaloo about. And the housewife who was in tears explained matters between sobs.

The husband told the senior security officers who tried to bring about a peaceful settlement that his wife’s friend who quietly had come to their room, pulled his leg to wake him and motioned him into her room.

The senior security officers later arranged a vehicle for the couple and the ‘ape akka’ to get back home.
The housewife had while on the way forced the ‘ape akka’ out of the vehicle.

However, the couple had later parted their ways: the wife had gone to her parental home while the husband to his native place.

Their marriage had later ended in divorce following a case filed by the estranged wife claiming maintenance for the child.

By the way, the husband had re-married, according to this story heard from the Kuliyapitiya area.