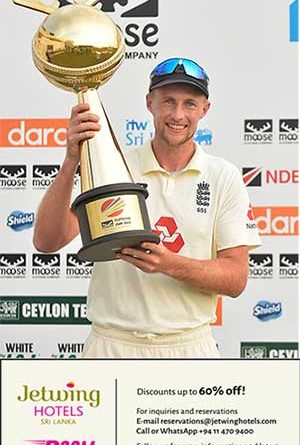 Sri Lanka had control of the second Test against England for the most part of the game and one session of madness where they lost six wickets sealed their fate as they suffered a heartbreaking six wicket defeat here in Galle yesterday. England, who had whitewashed Sri Lanka 3-0 in 2018, completed another series sweep asking serious question about the health of our cricket.

At 78 for eight, Sri Lanka were in danger of being shot out for their lowest total against England – 81 all out at SSC in 2001, but a fighting 40 from Lasith Embuldeniya saw them making three figures – 126 all out. A target of 164 was not going to test England.

England lost early wickets and when Joe Root was dismissed by debutant Ramesh Mendis, they still needed 75 runs. But Jos Buttler (46) and Dominic Sibley (56) sealed the deal for England with some solid batting.

Lasith Embuldeniya bowled superbly finishing with a match bag of ten wickets but Dilruwan Perera was unimpressive. His opposite number, Dom Bess with a First Class average  of 30, looked far more threatening.

Bess teamed  up with his Somerset spin partner Jack Leach as they shared eight wickets between them. When Embuldeniya was scoring some vital runs for the team, Joe Root introduced himself and polished the tail claiming two wickets  in successive balls. There’s hardly anything that Root can do wrong this tour.

Root has been a sensation with the bat. He finished the series with 426 runs that included a double hundred and 186. Not since the heydays of Brian Lara in 2001 a batsman has had such a big impact in Sri Lanka. Root’s game plan was  simple.  He would defend the full ball from the spinner and for the short balls he had one option – sweep, which he played to perfection. It was a treat to watch.

Not only was Root’s batting has been impressive but so has been his captaincy. He has now won five Test matches in a row in Sri Lanka. This was England’s  sixth win in a row in the island. They have not lost a game since the first Test in 2012.

Sri Lanka lacked fight.  Playing fast bowling has been their nemesis but all of a sudden they look vulnerable against spin bowling. If Bess can take 12 wickets in a two Test series, Geoff Boycott’s  mum will at least take half of them.