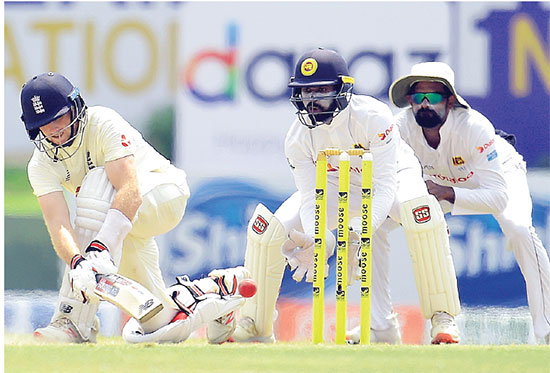 It’s not Brian Charles Lara class yet, but Joe Root has put up a splendid display on how to play spin bowling here in Galle in the second Test match against Sri Lanka. The former West Indian captain on a tour of Sri Lanka in 2001 had posted 688 runs in six innings and 20 years later, Root now has 415 runs after three innings.

The England captain missed out on a second double ton by 14 runs as he was run out in the last over before stumps on day three. Root had scored a match winning double hundred in the first Test here last week and he was rarely troubled during his marathon that lasted for eight and half hours and with the bowlers running out of ideas, the only possible way he could get out was via a run out.

Root attempted a flick to mid-wicket but the ball was collected on the bounce by Oshada Fernando who threw it back to the stumps and despite the diving effort by a tiring Root he was short of his crease.  Root faced 309 deliveries for his 186 and hit 18 fours.

Root’s game plan was simple and yet he had to execute it and did it to perfection. For fuller length balls, Root would go on the back foot and defend and then when spinners bowled it short, he would play the sweep shot. Sri Lanka at times had three fielders on the boundary for the sweep, but he still managed to find the gap.

Lasith Embuldeniya picked up seven for 132, his career best figures, but his efforts were overshadowed by those of Root, who was never troubled during his knock.

The Yorkshireman brought up his 19th century in the morning having resumed on 67. He was involved in a 97 run stand for the fifth wicket with vice-captain Jos Buttler (55) and when debutant Ramesh Mendis broke the stand claiming his maiden wicket, Sri Lanka were looking to control proceedings with England still 152 runs behind.

But an 81 run stand followed between Root and Dominic Bess (32) for the seventh wicket as England regained the initiative. The pendulum, however, would swing back one last time in Sri Lanka’s favour on day three.

From 333 for six, England lost three quick wickets for six runs to slump to 339 for nine to trial by 42 runs.

Sri Lanka would be looking to knock off last man James Anderson early and if they are able to post 150 more runs in the second innings, they could square the series, with the wicket expected to deteriorate further in the last two days.

Veteran Dilruwan Perera needs to pull up his socks after he failed to pick up a wicket despite sending down 31.2 overs in the innings.