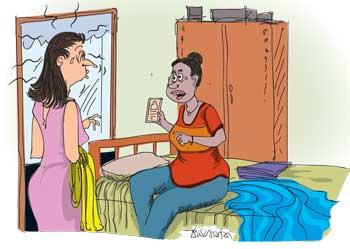 This young couple were living happily with their two children in a village in Rajarata. The husband is a teacher, used to give tuition to children in their homes in the evenings to supplement his meagre salary.

The wife, who was much devoted to the husband, made no objection to the latter visting homes late in the evening to give tuition to children.

By the way, there was a young widow in the same village who was a close friend of the wife, and her husband was giving tuition to the child of the young widow as well.

In fact, on certain days the wife would accompany her husband to the widow’s house.

One day, the wife of the teacher visited the house of the widow for a cordial chat. After some small talk, the widow took her visitor to her bedroom to show several sarees she had bought recently.

Meanwhile, the wife of the teacher suddenly noticed an identity card lying on the widow’s bed and she instantly identified it as the card of her husband.

“This is my husband’s identity card,” she exclaimed.

“My son may have thrown it there!”  was the host’s reply.

The wife who flew into a frenzy of anger, rushed to the place where her husband was giving tuition to the child and started haranguing him.

And this incident marked not only the end of the tuition class, but also the long-standing friendship between the two women!