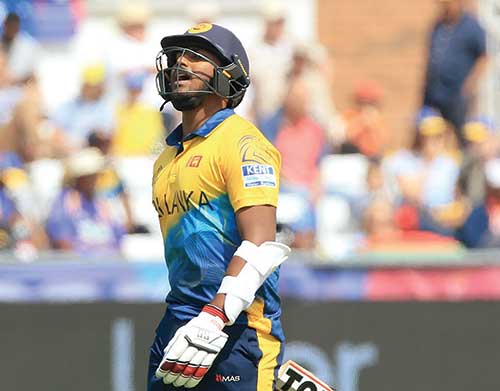 Sri Lanka Cricket has issued an ultimatum to its contracted players after eight of them failed a fitness test in Colombo. A pool of 20 shortlisted players for the upcoming tour of West Indies underwent fitness tests in Colombo and eight of them did poorly failing the tests. The list includes several permanent members in the side and some senior players.

The players have now been given an ultimatum to get their act together before another fitness test on February 3rd. If they failed the second fitness test, they will be ineligible for selection for the tour of West Indies. Sri Lanka will play two Tests, three ODIs and three T-20s in the Caribbean.

Fitness has been a growing concern within the team and Head Coach Mickey Arthur has demanded excellence in this aspect. Opening batsman Avishka Fernando was sent home from Galle lead up to the Test series against England after he failed the fitness test. It is believed that Fernando had failed a second fitness test as well conducted yesterday.

It has been argued that players remaining at home during COVID times had resulted in poor fitness levels. But question marks about fitness standards had been there for a while now.

Meanwhile the bio-bubble in Galle has been pruned to 17 players after Sri Lanka Cricket informed team management to send home five players. The bubble will be reduced by a further two on the day of the match making the squad to 15 players, like during pre-Covid days.

The reserves engaging in card games when the batting was collapsing on day one of the Test match had angered fans and former players. It is believed that the drastic measure to send players home was taken as a reaction to it. The players were not in the dressing room when cameras caught them playing cards but in a floor above the dressing room.

Accordingly, Dimuth Karunarante, Kusal Mendis, Nuwana Pradeep, Minod Bhanuka and Lahiru Kumara have been sent home. Karunaratne and Mendis were not involved in card games. The former has been released as he is injured while the latter has been sent to the High Performance Center at RPS to work on technical aspects of the game. Mendis picked up four ducks in a row.

Suranga Lakmal and Oshada Fernando, two players who engaged in card games, have recovered from their injuries and are expected to feature in the second Test match. While Lakmal is expected to share the new ball with Asitha Fernando, Oshada is expected to fill the vacant number three slot.

Niroshan Dickwella will continue to bat at number six but has been asked to provide more consistency.