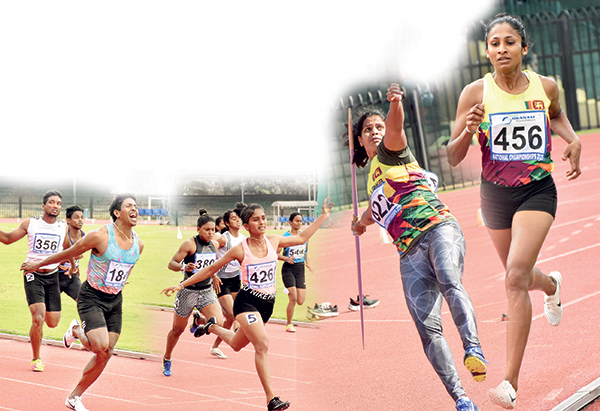 With Sri Lanka Athletics announcing qualifying standards in advance to select several pools targeting international events, the 98th National Athletics Championship, which concluded on Tuesday, witnessed a number of athletes pushing their limits to produce outstanding performances. Despite being hampered by the absence of preparation meets including the trial meets which were abandoned in the eleventh hour due to the outbreak of the Covid 19 pandemic, several athletes inspired the rest to be resolute even in adversity.

Sprinter Amasha de Silva and middle distance runner Dilshi Kumarasinghe who announced their arrival at the Asian Junior Championships in 2018 as future prospects, not only cemented their positions as formidable senior contenders at this meet but also provided hope of earning top Asian rankings.

Both turned tables on senior campaigners. Amasha the athlete trained by Sanjeewa Weerakkody clocked an outstanding 11.55 seconds to win the 100 metres dash. It was hailed as one of the top 100 metres performances in history by a female athlete. The outstanding feat secured the former Swarnamali Balika sprinter a place in the Sri Lanka Athletics elite pool as she overpowered former champion Rumeshika Ratnayake.

Dilshi Kumarasinghe surprised the veterans Nimali Liyanarachchi and Gayanthika Abeyratne during the last 200 metres of the 800 metres final. With her outstanding feat she not only secured her a place in the elite pool but also pushed the two veterans out of their comfort zones to achieve the qualifying marks to enter the elite pool. The 2:0280 seconds effort was outstanding in many ways. It improved her personal best and got her almost closer to the national record held by Liyanarachchi and powered her to the second position in the Asian Rankings. However, the former Ratnayake Central, Walala athlete did not do justice to her true potential in the 400 metres pushing hard a bit too late.

A feat of 53.47 seconds to win the women’s 400 metres was a welcome sign as Nadeesha Ramanayake, who was making a return after being sidelined at the South Asian Games due to dengue fever, retained her title. Kumarasinghe clocked 53.81 seconds to settle for silver. But had she given her best, it would have stood in good stead for Ramanayake too as a closer competition would have pushed them to the elite pool. The qualifying standard for the elite pool in the 400 metres was 53.20 seconds.

Sprinter Kalinga Kumarage who was returning to track after two years following a Disciplinary Committee clearing him of doping, clocked a wind-assisted 20.79 seconds to win the men’s 200 metres. His 400 metres performance of 46.25 seconds secured him the place in the elite pool.

Gayanthika Abeyratne was well within the range of the standard set for elite athletes when she clocked 4:17.58 seconds to win the women’s 1500 metres.

Triple jumpers Hashini Balasooriya (13.07 metres in the women’s event) and Sanjaya Jayasinghe (16.32 m) and Sreshan Dananjaya (16.12m in the men’s event) were outstanding but fell just short of securing a place in the elite pool. So was Olympian Sumeda Ranasinghe who had a notable 76.10 metres which was better than his South Asian Games bronze winning feat.

Ireshani Rajasinghe (13.85 secs) clinched the national title winning the 100 metres hurdles against defending champion Lakshika Sugandi (13.89 secs). Both were notable performances for athletes returning to action after one year.

A majority of athletes returning for their first meet in a year found it hard to match the elite standard. Even Nilani Ratnayake, who has a high world ranking, eligible to secure a place in the Olympics, could not reach the elite selection timing finishing her pet event the 3000 metres steeplechase (in 10:15.86 seconds) some 15 seconds slower.

One could feel sorry for Rusiru Chathuranga who was left at the threshold of the qualifying mark of the elite pool with his 1:49.82 seconds effort in the men’s 800 metres. With other leading runners including National record holder Indunil Herath failing to get even to the national pool mark (1:51.50 secs) the Asian Championship participant Chathuranga’s effort must be commended.

Sprinter Himasha Eshan’s 10.27 seconds in the 100 metres had assistance from wind.

It would augur well for athletes if the Athletics authorities could reconsider the standard for elite pool before finalizing it.