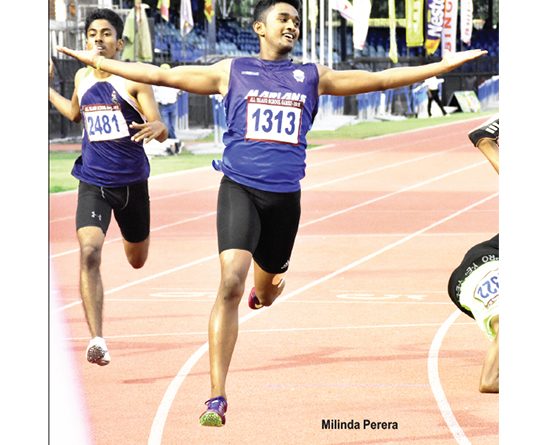 When the track and field sport resumes action this weekend after more than a year on the sidelines due to the Covid 19 pandemic, not only the top national athletes who are going to benefit. While the elite senior athletes compete to achieve qualifying standards for the Olympics and other international events, a host of school athletes vying against their senior counterparts will strive to weigh in their strengths in a bid to compete locally and internationally in 2021.

The Covid 19 pandemic prevented many an international sports event, including the Olympics, taking place in 2020. But the world sports governing bodies who postponed or cancelled such events are preparing to conduct events in 2021. The World Under-20 Athletics Championship which was to be held in Nairobi in July this year has now been rescheduled in 2021. School athletes who could not compete at junior national level due to the absence of competitions this year will take the 98th National Athletics Championship staring on Saturday as a platform to measure how well they have prepared to achieve entry standards for such events.

Youth Asian Championship medallist Navishka Sandesh is among a host of young sprinters aspiring to achieve entry standards for the World Junior event. The St. Sebastian’s College, Moratuwa sprinter clocked 47.96 seconds in the Under-18 boys’ 400 metres semi final at the Junior National Championship in 2019 to establish a new meet record. The strong competition in the senior category will augur well for the young hopeful as he will be lining up against South Asian Games medallist Aruna Dharshana and company.

Sprinter Milinda Perera is another schools aspirant who will have World Under-20 Championship entry standards on the back of his mind when he competes against seniors. The St. Mary’s College, Chilaw sprinter was the Under-18 200 metres champion at the last Junior Nationals. He will be competing in the men’s 100 and 200 metres alongside former national record holders and current national record holders. Lumbini’s Chalith Piyumal who was placed second behind Perera in the 200 metres will also be another young hopeful vying against seniors at the four day event. He had a feat of 22.22 seconds at the last Junior National finals.

In the women’s sprint events, most of the school athletes who won podium places at the last Junior Nationals (2019) make the majority in this senior National event, though one of the top contenders, Sadeepa Henderson will be conspicuous by her absence. Most of the sprinters trained by veteran coach Sunil Gunawardena have skipped the Nationals after the event was postponed to December.

2019 Asian Youth Championship bronze medallist Amesha Hettiarachchi is one of the top school hurdlers competing against seniors at this meet. The Viharamahadevi Balika, Kandy hurdler was the winner of both the Under-18 400 metres and the 400 metres hurdles at the last Junior Nationals. Hettiarachchi established a new record in her pet event clocking 61.71 seconds in the heats. Her bronze medal performance at the Asian Youth Championship was 61.42 seconds. She has to slash nearly one second off her last personal best over the higher hurdle if she is to achieve entry standards.

Holy Cross College, Gampaha athlete Shanika Lakshani who won the Under-18 800 metres at the last Junior Nationals will feature in both the 800 metres and the 400 metres. The Asian Youth Championship participant will have a tough ask in her pet event against seasoned campaigners but that battle will help her strive for the World Under 20 championship entry standards. Sri Lanka Athletics has included a number of junior school athletes on merit for the corresponding boys’ event as well as there are potential athletes who could make the most of the opportunity.

School athletes will form nearly one third of participants in the women’s category at the 98th National Athletics Championships. Though school athletes will not be among the favourites it will be an invaluable opportunity for the budding athletes who were without competitions to prove their potential.