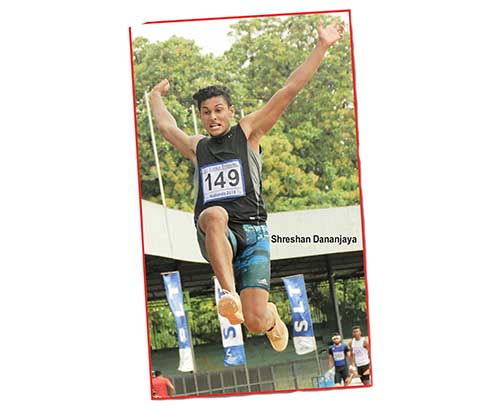 More than half a dozen top national athletes will have tough Olympic qualifying marks or achieving better world rankings as their prime targets when they compete for the first time in more than a year at the 98th National Athletics Championship which will be conducted under strict health guidelines at the Sugathadasa Stadium, starting on Saturday.

Currently steeplechaser Nilani Ratnayake is the highest ranked Sri Lankan athlete. Though she is yet to achieve the tough Olympic qualifying standard of nine minutes and 30 seconds in her pet event, the impressive performances in 2019 including a 9:48.38 secs feat at the World Military Games has positioned her at a creditable 30th place in the World Athletics rankings. With her ticket for Tokyo almost booked, Ratnayake will be striving to achieve a better world ranking. Some 45 athletes will be selected for Olympics women’s 3000metres steeplechase. Currently only 18 athletes (of whom nine are Kenyans) have achieved the tough qualifying standard. Ratnayake is among the 27 others who are in the ranking quota to compete in Tokyo. It would also be interesting to watch how schools athletes, Youth Olympics medallist Parami Wasanthi and her schoolmate Ashmika Herath cope up with the pressure of competing against seniors in the steeplechase.

In August last year, Olympian Sumeda Ranasinghe produced back to back impressive performances in the men’s javelin. A throw of 79.12 metres at the Army Championships and a better feat of 80.76 metres at the National Championships mirrored glimpses of the form he exhibited in qualifying for Rio Olympics. Unfortunately there were no meets this year to weigh in his true potential. Currently Ranasinghe is occupying the 36th place in the World Rankings. His closest Sri Lankan rival and former national record holder Waruna Lakshan will be eager to create an upset. Lakshan is currently ranked 99th in the world and is almost certain to improve his world rankings with a good throw at the Nationals.

The duals between Nimali Liyanarachchi and Gayanthika Abeyratne have been some of the most looked forward to events in athletics. This year joining the fray in the women’s 800 metres is South Asian Games gold medallist Dilshi Kumarasinghe. What you need is a record breaking performance if you are to achieve qualifying standards for the Tokyo Olympics. No Sri Lankan woman has ever run the 800 metres below two minutes. The tough entry standard of 1:59.50 seconds have been achieved by only 21 women in the world. With 48 athletes being selected for Olympics, Nimali and her rivals will strive to improve their world rankings. Currently the Spanish athlete who is occupying the 48th position in the world rankings has only a personal best of 2:02.63 seconds which is well within the reach of the top two Sri Lankans in this discipline.

They are not the only athletes targeting qualifying standards as there is potential is few other events including women’s javelin, women’s triple jump. Sri Lanka Athletics is also looking forward to qualify relay teams for the Tokyo event.

The absence of competitions due to Covid 19 pandemic hampered Sri Lankans’ chances of entering world rankings which is a must to earn the Olympic ticket. Sri Lanka Athletics is organizing the 98th Nationals under trying conditions to fill that void.