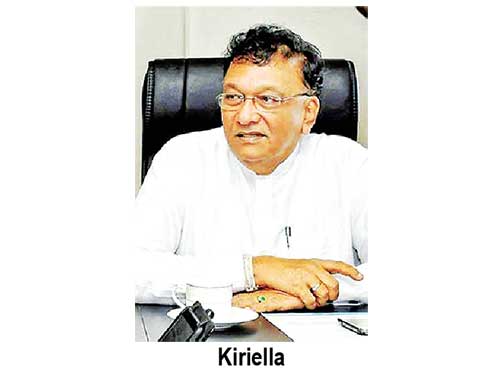 The Samagi Jana Balavegaya (SJB) yesterday said that the proposed handing over of the Colombo Port’s East Container Terminal to India’s Adani Group contravened the government’s repeated pledge to give priority to Sri Lankan firms.

Chief Opposition Whip and Kandy District SJB MP Lakshman Kiriella said that the Adani Group was facing allegations of serious malpractices and the government should explain to the nation the criteria it had adopted in giving that company the contract to operate the ECT. “The question is whether there is no local investor who can invest USD 500 million. This government came to power promising to promote the local companies and entrepreneurs but it is now handing over the vital terminal to foreign companies. In that case, too, they cannot find companies with clean records.”

The Chief Opposition Whip said that there were reports that the owner of the Adani Group Gautam Adani was a very close associate of Indian Prime Minister Narendra Modi and it could be surmised that the Lankan government thinking of winning over Modi by giving ECT to Modi’s friend. “That is a serious mistake if they think so. India does not operate that way. India has policies with regard to Sri Lanka and those policies would not change according to Prime Minister Modi’s wishes. Here in Sri Lanka if you do business with couple of TV channel owners friendly with the President, you may win favours of this government, but that would not happen in India. It is also a serious question whether Prime Minister Modi keeps such a close friendship with Adani who has a dubious record and corruption charges.”