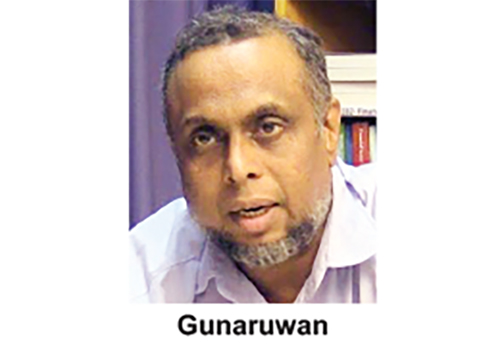 US leaves Lanka out of MCC

Prof. Gunaruwan, an economist, who headed a four-member committee that examined the controversial agreement was responding to the US decision to terminate the offer of USD 480 mn (Rs 89 bn) development assistance against the backdrop of Sri Lanka declining the grant.

The Colombo University don whose four-member committee strongly objected to the agreement as it is, told The Island that the compact posed a threat to Sri Lanka.

He said that he wasn’t aware of negotiations between the two parties on the basis of their report handed over to President Gotabaya Rajapaksa on Feb 17, 2020 at the Presidential Secretariat.

Responding to another query, Prof. Gunaruwan said his committee had recommended remedial measures following an in-depth study of the agreement. He acknowledged that the committee couldn’t ascertain the position taken by the Attorney General in that regard.

The Attorney General’s position has not been made public yet.

In response to The Island query as regards Sri Lanka being denied funding, the US embassy has sent us the following statement: “On December 15, the Millennium Challenge Corporation (MCC) board decided to discontinue the proposed Rs. 89 billion MCC development assistance grant to Sri Lanka due to lack of partner country engagement. The Rs. 89 billion approved for Sri Lanka will be made available to other eligible partner countries in need of grant funding to pursue their economic development priorities, reduce poverty, and grow their economies.

“Country ownership, transparency, and accountability for grant results are fundamental to MCC’s development model. MCC has successfully partnered with nearly 30 countries worldwide on 38 grant agreements, totaling nearly $13.5 billion. These grants have lifted millions of people from poverty by catalyzing local and domestic investment.

“The United States remains a friend and partner to Sri Lanka and will continue to assist Sri Lanka in responding to COVID and building its economy.”

Subsequently, The Island sought an explanation from the US mission with regard to the previous US embassy announcements pertaining to the funding made available to Sri Lanka to the tune of USD 10 mn on two occasions.

The US embassy spokesperson said the MCC grant monies had never been transferred to or spent by Sri Lanka in terms of the then proposed USD 480 mn funding. The official said that funds amounting to USD 10 mn for what the embassy called preparatory activities had been cancelled. The official said: “The government of Sri Lanka first submitted a proposal for MCC grant funding under former President Mahinda Rajapaksa in 2005. All activities in the most recent proposed grant were requested by Sri Lankan Government line ministries and departments, and the programme was negotiated in good faith after extensive consultations with Government officials, the private sector, and civil society. The MCC grant would have been the largest in Sri Lanka’s history and would have benefited more than 11 million Sri Lankans.”

During the previous administration, the US announced the disbursement of USD 7.4 mn (Rs. 1.1 bn) on July 27, 2017 and USD 2.6 mn (Rs.413) in June 13, 2018 grants for preparatory work namely (i) to develop a compact, including identification and analyzing of specific projects and (ii) to finalize compact development. The US embassy stated funds allocated to the tune of USD 10 mn were in addition to the total MCC compact funding amount.

Prof. Gunaruwan’s report has said that in spite of the US Compact being categorised as a development project, it could pose a threat along with ACSA (Acquisition and Cross Servicing Agreement) and SOFA (Status of Forces Agreement). The UNP-led government finalised ACSA in the first week of August 2017. President Maithripala Sirisena, in his capacity as the Defence Minister authorised the signing of the agreement. The US agreements dominated both 2019 presidential and 2020 parliamentary polls. The report says the three agreements could be part of the overall US Indo-Pacific strategy.

Well-informed sources said that the four-member committee had found fault with a decision to allow all procurement and related matters to take place. That decision clashed with a specific provision in the 19th Amendment, sources said. However, the 20th Amendment enacted by the incumbent government had done away with that provision, sources said.