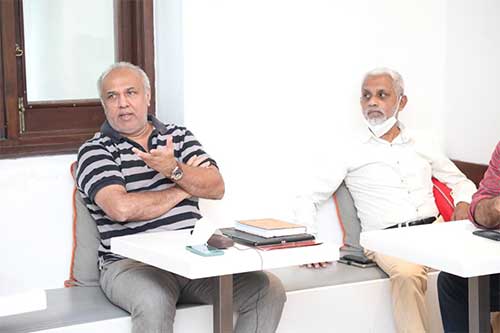 SLMC: Dissident group that voted with SLPP in majority

The Sri Lanka Muslim Congress (SLMC) has threatened disciplinary action against those who voted for the 20th Amendment on Oct 22, but it is struggling to cope with the situation as rebels are in the majority, according to political sources.

The expulsion of the rebel group was certainly not possible, sources said, pointing out that of the five-member SLMC group, four elected MPs, H. M. M. Harees (Digamadulla), Faizal Cassim (Digamadulla) , M.S.M. Thowfeek (Trincomalee) and Nazeer Ahamed  (Batticaloa) had switched their allegiance to the ruling SLPP. They are among the eight Opposition members who voted for the 20th Amendment, which was opposed by the SJB-led Opposition.

Parliament ratified the 20th Amendment with a two-thirds majority.

Of the five-member SLMC group, only Mahanuwara District lawmaker SLMC leader Rauff Hakeem voted against the 20th Amendment. All of them were elected to parliament on the SJB ticket.

SLMC Secretary M. Nizam Kariapper, PC, said that the party would decide on action once individual members submitted written explanations to the party leader and the Secretary by Dec 31, 2020. The office-bearers of SLMC high command announced the decision on Sunday (13).

Sunday’s meeting took place at the SLMC leader’s Kollupitiya residence. The discussion covered the conduct of the rebel group members subsequent to them voting for the 20th Amendment and the current political situation. Having received their explanations verbally, they were asked to provide their account in writing, sources said,

Taking part in the Sirasa Pathikada programme DPF leader Mano Ganesan yesterday (14) told interviewer Asoka Dias that disciplinary action would be definitely taken in respect of Aravindh Kumar. Former yahapalana minister Ganesan assured that the party would follow laid down procedure in dealing with the MP.

The SLMC, the ACMC and the DPF are constituents of the main Opposition party SJB. The SJB group includes seven National List MPs. Of the seven NL members, rebel Gamage is the only newcomer to parliamentary politics.

Political sources said that SJB had been compelled to deal with one of its own MPs breaking ranks, while three of its constituents experienced serious trouble with the SLMC being the worst affected.