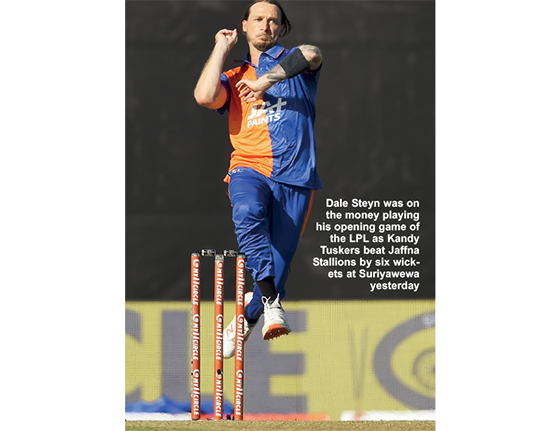 The arrival of Dale Steyn seemed to have rejuvenated Kandy Tuskers as they put up a splendid show to beat the in form Jaffna Stallions in a Lanka Premier League encounter at Suriyawewa yesterday. Steyn had missed six games that Kandy Tuskers had played as he had to spend time in quarantine. He was available for yesterday’s game and one of the world’s most feared fast bowlers was on the money.

Steyn dismissed Aviksha Fernando in the second ball he bowled and his ‘fishing celebration’ became an instant hit as the batsman had chased a wide delivery and was caught behind.

Steyn’s spell was the  quickest by anyone in the competition. He was well backed up by the team’s other seamers – Vishwa Fernando and Nuwan Pradeep, who picked up two and three wickets respectively.

It was a fine effort by the bowlers to dismiss Jaffna Stallions for 150 and the run chase was completed with five balls to spare.

Asela Gunaratne, who had picked up two wickets top scored for Kandy Tuskers with an unbeaten 52 that came off 37 balls with seven fours and a six.

At 95 for four in the 14th over, Jaffna had things under control but an unfinished 56 run stand for the fifth wicket between Gunaratne and Irfan Pathan took them through the finish line. Pathan was unbeaten on 25. Interestingly Pathan didn’t bowl as he was nursing a groin injury. But he did the job his team required.

Kandy now have a good chance of making it to the semis of the five team competition.