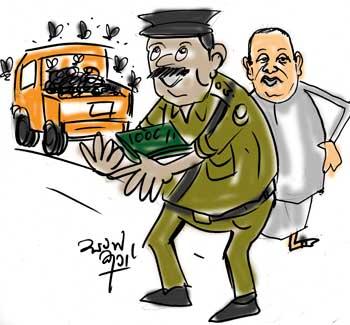 A khaki high-up has reportedly ignored a tip-off given by a prominent politico to take into custody five tipper truck drivers along with their vehicles transporting waste matter for dumping into a well-known wetland north of the main city.

It had come to light later that the khaki high-up had released the five drivers with the vehicles without taking legal action against them.

The politico who had learnt that this particular khaki high-up had made it a practice to collect kickbacks from truck drivers transporting waste matter to the wetland had reported the incident to a high political authority, who had taken prompt disciplinary action against the khaki high-up, informed sources say.