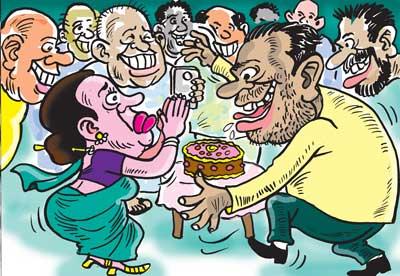 The symbolic cutting of the cake to celebrate the birthday of government Diyawanna politicos in the Number Two’s office has now become a well-established tradition.

The birthday of a Diyawanna member from the North with the prefix ‘Doctor’, had come to coincide with the voting day of the recent Budget’s second reading.

In keeping with the tradition, the birthday of the Diyawanna members from the North was celebrated with Number Two as the chief guest.

Present among the 30 to 40 Diyawanna politicos, who attended this birthday party, was a lady member from the opposition who recently joined the government ranks.

After partaking of the pieces of the cake, the guests present began wishing the birthday celebrant. While most participants congratulated him with the usual handshake, some others turned to the more affectionate mode of wishing, giving the celebrant a hug.

When it was the turn of the lady Diyawanna member to wish the birthday celebrant, a government senior told her: “A mere handshake in your case won’t do. You should hug him following the practice in England!”

This request to the lady member prompted the birthday celebrant to move closer to her. However, she said: “Mata owa behe! (I can’t do that kind of thing) and greeted the birthday man in the typical oriental fashion!

It was a great disappointment to some participants who were eagerly waiting to capture an interesting picture on their phone-camera, they say.