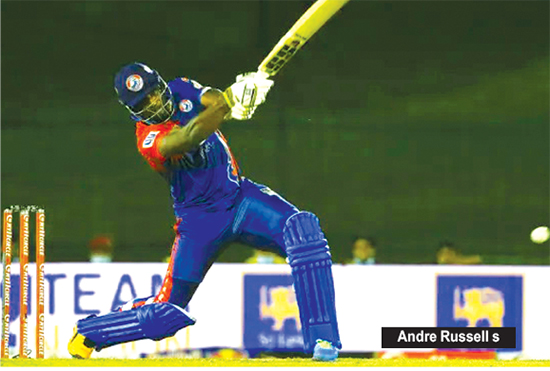 With this innings, Andre Russell basically crash-landed at the LPL like an alien from a way bigger-hitting planet than earth, clobbering what seemed like nine dozen sixes (apparently four sixes, according to the scorecard) and half-a-million fours (nine fours) in the space of five overs, to send Colombo Kings sky-rocketing to some ludicrous total that – let’s be honest – Galle Gladiators never really had a hope of chasing down.

This was utterly remorseless from Russell, who was like a 12-foot giant running wild in a playpen full of toddlers. He blasted two sixes and three fours in Mohammad Amir’s first over, at the end of which Kings were 26 for no loss, before hitting a six and three fours off the next over, bowled by Asitha Fernando.

It didn’t seem to matter where the bowlers went, or whether they seemed to execute their deliveries or not. Around every corner was Russell, bat raised and a glint in his eye. Of the Gladiators’ four bowlers, only Mohammad Shiraz did not concede a six to Russell.

Laurie Evans was outstanding at the other end too, hitting back-to-back sixes off Amir’s second over (Amir ended up conceding 46 from his two overs), and a four off Shiraz. He was 21 off 10 balls when in the last over, Russell clubbed Shahid Afridi to long-on, before turning down the single so he could keep the strike for the rest of the over.

On the surface, this seems disrespectful to Evans, and it kind of was. But then Russell crashed a four through long-on next ball, and a six over backward square leg the ball after. So, you know, you couldn’t really fault that decision either.

That the match had been shortened to five overs a side was down to the three hours of rain that had fallen this evening. The weather conspired to bring Russell out as an opener, and in some ways, this innings was more entertaining than many regular T20 matches.